Getting into the Weeds

15 million square kilometers of the Earth’s surface is covered by . According to the Food and Agriculture Organization of the United Nations, neither Europe nor North America has much room for agricultural expansion. With the population expected to grow from today's 7.6 billion to a staggering 9.8 billion in 2050, farmers are turning to technology to increase crop yields on the available .

Farmers are adopting a mix of technologies to boost yields, from GPS-enabled tractors and robotic to moisture sensors and smart irrigation systems. The one commonality in these technologies? Data.

Farmers have tons of data. Their fields are GPS mapped. Their tractors have sensors and cameras. Their fields have soil moisture sensors. They even have data on soil types, weather data, and data on which types of seeds perform best in various environments.

Even with all this data, there is a blind spot when it comes to the performance of the plants. Farms are simply too large for the farmers to monitor the health of individual plants without the use of technology. This is why many farmers are turning to precision agriculture using aerial imagery.

"It’s time-consuming to walk an entire field, but aerial imagery can provide the detailed information needed for both in-season insights and end-of-season guidance on what to change to improve next year's crop. There is a lot of research and development focused on these applications from an agronomic perspective.”

Aerial imagery can achieve the to-the-plant detail farmers need to take appropriate action during the growing season. By pinpointing where weeds are taking hold within a field, for example, farmers can limit herbicide application to that location; they don’t have to spray the entire field. 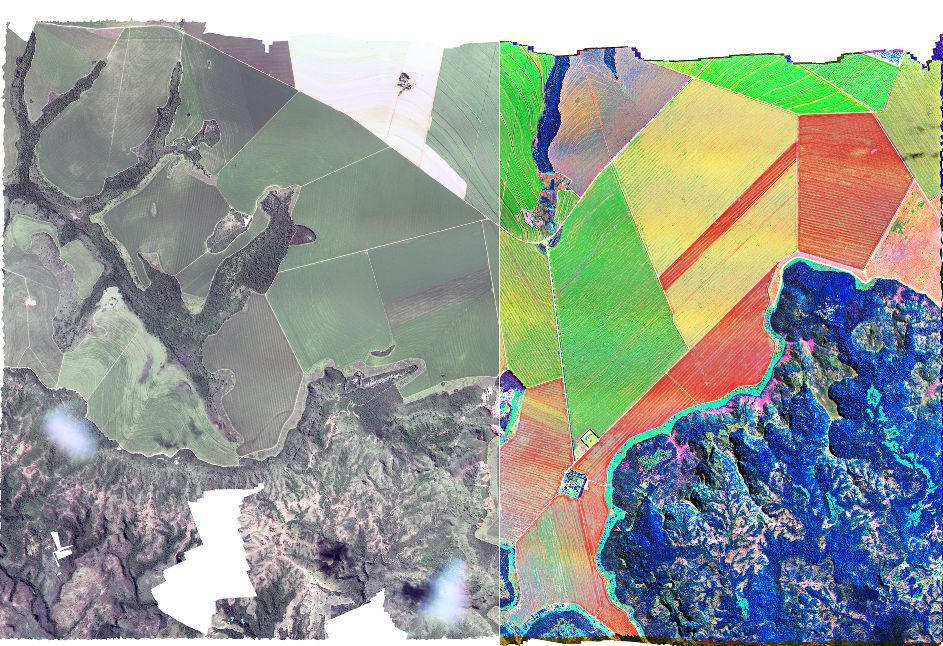 Farmers have a deep understanding of their land, but they aren’t data scientists. So, instead of trying to decipher the terabytes of data generated by aerial imagery, farmers are partnering with image analytics firms. These companies specialize in turning raw data into recommendations that farmers can implement on their farms.

IntelinAir, a U.S.-based precision agriculture company specializing in aerial imagery analytics, uses manned airplanes to image fields. They leverage a combination of visible, near infrared (NIR), and thermal cameras. They capture images throughout the growing season, giving farmers a snapshot at a given time, gathering trend data for longer-term planning, and alerting farmers to problems so they know where to take action.

"Thermal images help us understand the soil moisture profile, while the NIR camera is geared toward showing the stress or health of the field. Once we know the trends in soil moisture and crop health, we can give farmers in-season guidance on what to prioritize in managing their operations.”

In addition to using data from weather stations and ground sensors, the Swiss precision agriculture company Gamaya captures hyperspectral images with satellites and custom drones. Hyperspectral images use extra bands of light to detect specific traits within the plant. 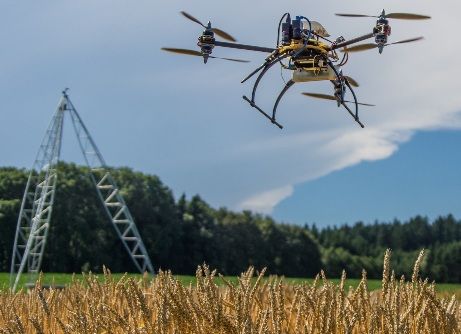 “Hyperspectral imagery allows for detailed diagnostics of the physiological conditions of plants,” states Yosef Akhtman, CEO of Gamaya. "The way plants interact with sunlight forms a crucial part of their metabolism, resulting in the tight relationship between their physiology and their reflective properties."

Farmers are far more interested in the final report in the method used to collect the data. These reports, delivered via tablets or PCs, tell the farmer where to focus their attention. They can pinpoint a problem on an isolated few plants in a large field, and tell the farmer what caused it. If weeds are encroaching, then herbicide can be used. If the stress is caused by caterpillars, the farmer can spray that section before the pests become more widespread. If the plants are suffering from a disease such as common rust, then a fungicide is prescribed instead of a pesticide.

But how do precision agriculture firms turn raw images into the precise prescriptions contained in the final report? Emerging crops are tiny specks of green spread across acres of soil. It’s hard enough to spot weeds when driving a tractor through the field, so how is it possible to spot a weed from the sky?

That’s where computer vision and artificial intelligence (AI) come into play. Computer vision and AI are used to classify large sets of image data and detect patterns that can be correlated with specific issues, such as an outbreak of weeds.

"In many cases, the undesirable plants can look very similar to the actual crop, particularly in the RGB color space perceived by the human eye. The difference between a weed and a crop plant would manifest itself in a subtle combination of spectral and morphological characteristics. This makes it a perfect candidate for an AI-driven solution.”

AI is turning precision ag into decision ag. AI spots patterns that indicate plant stress and diagnoses the cause. The result helps farmers address the issues, using the precise amount of inputs. Instead of spraying an entire farm each year for pests, farmers can concentrate their efforts on the infested areas. Similarly, farmers can reduce the amount of fertilizer required by applying the nitrogen only in areas that need the boost.

"We use algorithms to discriminate early-season vegetation that is barely visible due to its size, and generate a health score and anomaly algorithms that identify unusually high or unusually low stress,” explains Rose. “The algorithms rely on machine learning for pattern recognition and identifying issues and field trends. These algorithms generate metrics so that farmers can rank and prioritize the actions they need to take.”

For large farms, precision agriculture can show where attention is most likely to improve overall yield. For smaller farms, it helps farmers manage by exception to get the most from the fields under their care. 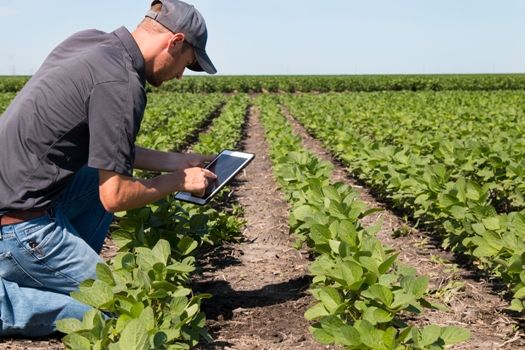 "In the next few years, computer vision, machine learning, and robotics will increasingly converge to help growers produce more food, more efficiently, and achieve greater financial returns in the process.”

Precision agriculture is good for more than the farmers’ bottom line; it’s also good for the planet. Reducing the amount of fertilizer used not only saves the farmer money, it also decreases nitrogen run-off from the vast farmlands.

"Variable-rate fertilizer application has been, and will continue to be, a promising area in precision agriculture,” explains Professor Luck. “In-season, sensor-based reactive nitrogen management can allow us to improve nitrogen-use efficiency. If the crop has a yellow color to it (i.e., nitrogen deficient), the sensors detect that and inform the variable-rate sprayer to apply more nitrogen at this location to correct the deficiency. When you go to an area of the field that's dark green, the algorithm backs off the nitrogen rate.”

Increasing yield while decreasing inputs: The bottom line will be the farmers’ ability to provide high-quality, nutritionally-rich produce to feed our planet's growing population while minimizing the environmental impact.

The Robot Made Me Do It:

How Robots are Changing the Lives of Children with Disabilities

Designing a Robotic Prosthetic for a Professional Drummer

Turning a Medical Crisis into an Engineering Challenge to Save Lives