According to Safer America, roughly 1.3 million people die in car accidents worldwide every year—an average of 3,287 fatalities per day. Reducing deaths, injuries, and the financial costs associated with accidents is a top priority of governmental safety bodies and the global auto industry, including automobile manufacturers and the ecosystem of parts and safety-equipment providers that supply them.

Automakers and their suppliers invest heavily in both virtual and physical testing to improve occupant protection and reduce injuries. For physical testing, the intention is to recreate the same dynamics of the crash in a laboratory where every force, impact, reaction, and millisecond is choreographed and measured via sensor, camera, and computer.

Many Americans got their introduction to the world of crash-test simulation in 1985 courtesy of “Vince and Larry,” the stars of the U.S. Department of Transportation’s landmark “You Could Learn a Lot from a Dummy” ad campaign. Thanks in part to this personable pair of crash dummies, safety belt usage has increased from 14% to 79%, saving an estimated 85,000 lives and $3.2 billion (source: Ad Council).

But those frontal, full-car crash tests require hand-built prototypes and are very expensive to run, often exceeding $1 million per instance. For manufacturers designing products to reduce injuries, everything from the deformation of the car body to deployment time and force of airbags must be optimized. 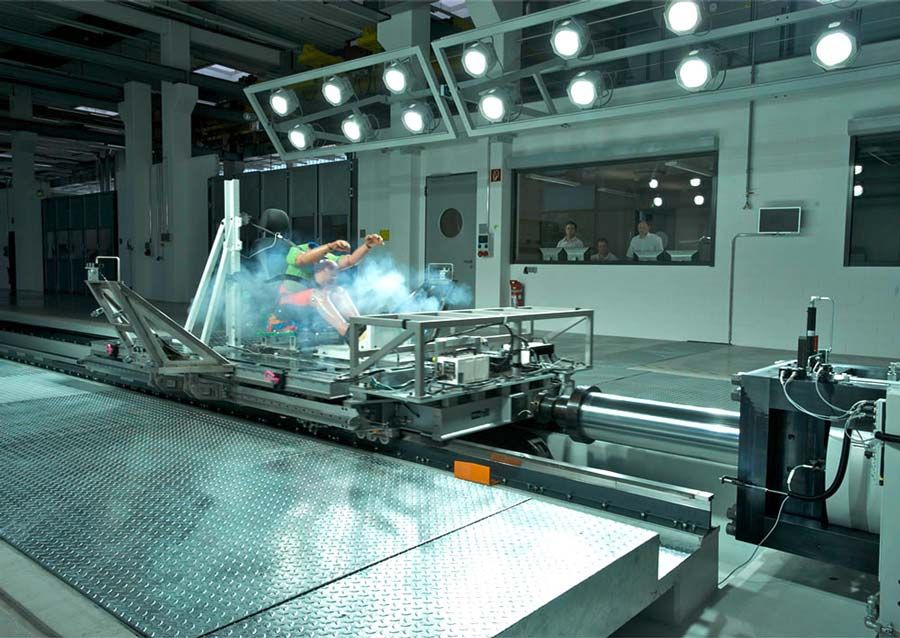 Because of design limitations on the vehicle structure, most of the burden of reducing occupant injuries falls to the “passive” safety system, which includes airbags, seatbelts, and other components. Together, these components can reduce the total deceleration force of a 30-mph impact on an occupant from 12 tons to 1.6 tons. With a wide range of occupants and crash scenarios to investigate, developers need a cost-efficient way to simulate crash dynamics in the lab before running a physical crash test.

Achieving these speed and cost benefits rests not only on the performance of the physical crash-simulation system but also on the virtual model behind it—in other words, on the simulation of the simulator. 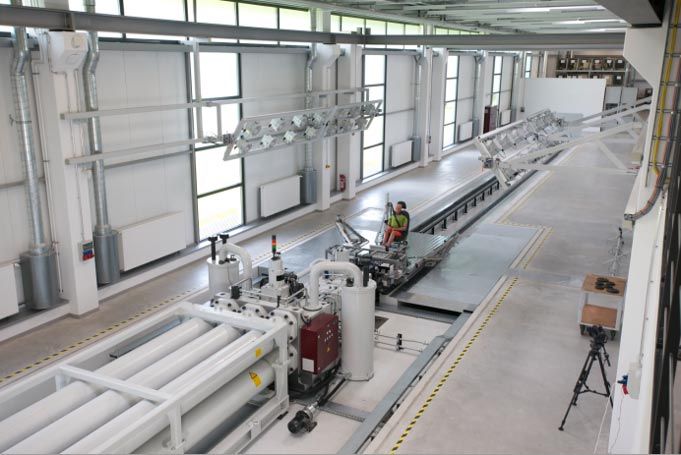 That is exactly the challenge Instron, a global manufacturer of test equipment, has accepted and mastered with its leading crash-simulation systems, which are now deployed across more than 75 sites around the world. Instron uses powerful software, a sled-based “catapult” system, and a precision controlled hydraulic actuator powered by 2.75 meganewtons (MN) of force that imposes the forces experienced during a crash on the occupant compartment prototype being tested. This approach enables Instron’s customers to run the tests they need more nimbly, accurately, and cost-effectively than ever before possible.

Achieving this trifecta of benefits rests not only on the performance of the physical crash-simulation system but also on the virtual model behind it—in other words, on the simulation of the simulator.

“For every combination of force, speed, and crash type our physical systems test, we simulate the results first in our model,” said Brad Carman, engineering manager at Instron. “The model is now accurate enough to replace work that was previously done physically to prepare the system, eliminating time and risk in the testing process, and in the end, producing a better result.”

You Could Learn a Lot from a Simulation

When Carman joined Instron in 2013, he did so for one reason: the crash simulation system Hydropuls® CSAadvanced.

“When I saw the catapult crash simulator in action, it was love at first sight,” he said. “I knew I wanted to dedicate myself to working on and improving that system.”

Crash simulation is an exacting science. Manufacturers and regulators use the system to test products against many parameters, including specific velocities and impact angles. The simulations improve their design and, ultimately, their performance and reliability when it matters most: in a life-threatening crash. Controlling these parameters—being able to achieve and repeat the physical simulation so that it releases the same forces each time—is critical to verifying results.

Carman knew that the key to performance rested in better modeling: “I knew that if we could model our simulations more precisely, we could drive better results for our customers, maximizing lab efficiency and the usefulness of the data they were gathering.” 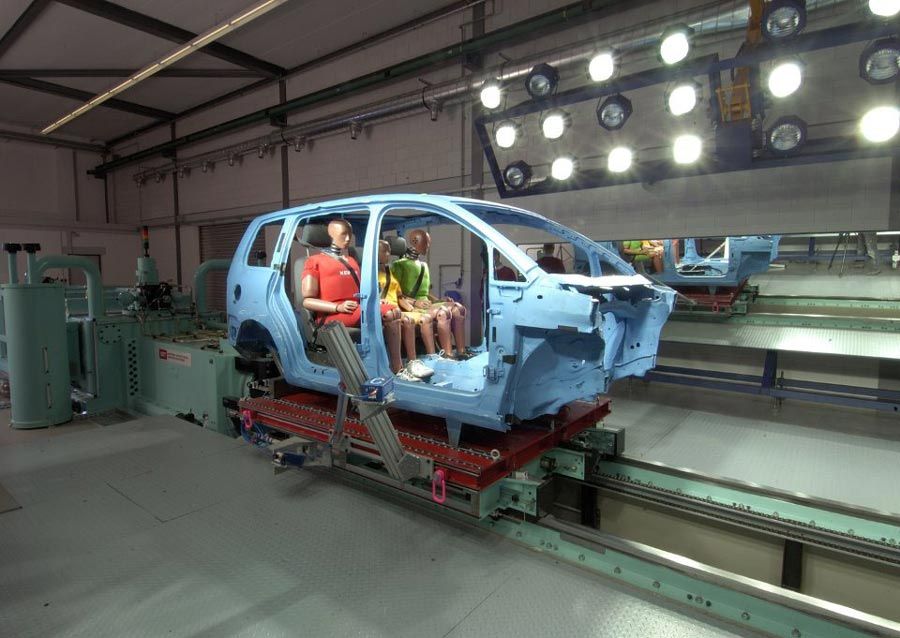 “I knew that if we could model our simulations more precisely, we could drive better results for our customers, maximizing the usefulness of the data they were gathering.”

In order to take Instron’s models from good to great, Carman set about increasing the resolution of the simulation by eliminating as many assumptions as possible. Over the course of a year, he introduced 170 variables into the system, accounting for various pressures, flows, and the performance of individual parts during the operation of the catapult simulator, which were previously not accounted for or simply assumed constant.

“The model was initially built using pure MATLAB® by coding the equations and solver and then using MATLAB Coder™ for integration into our software,” said Carman. “The project proved to be successful, nearly doubling the performance of the system. Customers were able to not only get better performance from the same physical system, but also achieve results much faster since time-wasting steps could be eliminated through accurate simulation.”

Later, Carman was asked to optimize the system's physical design. With a proven model now in hand, he could use the model to simulate a physical change to the system. The problem was, however, that the model was not built for flexibility; hard-coded equations do not lend themselves easily to systematic design changes. This is when Carman turned to Simscape™. “Because Simscape works a bit like LEGO blocks, we can make system-level changes more easily. I can now move components of the model around, or even add new ones, and Simscape re-assembles the entire model for me in an instant.”

“Without Simscape, this process would have been painfully slow.”

Initially, Carman was unsure how to integrate many of the custom modeling features from the first model iteration, such as the ability to create submodels and model inversions automatically from a single source. With some creativity, Carman was able to realize these features in Simscape as well through a custom tool he built, appropriately named “Bradscape.”

“Simscape is a beautiful language at its core,” said Carman. “Because it essentially exists as text files, there is no limit to what you can create and control.”

In the end, not only was a new optimal design proved, but all of the original uses of the model were replaced and easily integrated into the software using Simulink Coder.

While ease of modeling is important, results matter most to Carman and Instron. As their ability to model simulations continues to improve, they are shrinking the gap between simulations run virtually and those that run physically.

“Thanks to our partnership with MathWorks, we now have a living model of our crash simulators that runs incredibly quickly and accurately, so much so that our customers can test their assumptions virtually before running more expensive physical crash simulations,” said Carman. “This saves them time and money, which helps bring life-saving products to market faster.

“Thanks to our partnership with MathWorks, we now have a living model of our crash simulators that runs incredibly quickly and accurately, so much so that our customers can test their assumptions virtually before running more expensive physical crash simulations.”

“Additionally, the speed at which we can now run our model—so fast that it is approaching real time—is creating a kind of convergence between the model and the system that could make step-change performance improvements for our customers possible.”

Exploring the World's Largest Ecosystem – 500 Meters Below the Ocean Surface

Tackling Tumors in a Single Step

Wireless Coverage from One Autonomous Aerostat Equivalent to 15+ Cell Towers