When Order Hides in Plain Sight

Complexity Looks Chaotic but Is Actually Quite Controllable

Last year, the Nobel Prize in physics went to three scientists for their work on complexity. Syukuro Manabe and Klaus Hasselmann won, according to a prize announcement, “for the physical modelling of Earth’s climate, quantifying variability and reliably predicting global warming.” Giorgio Parisi won “for the discovery of the interplay of disorder and fluctuations in physical systems from atomic to planetary scales.” All three showed there is a simplicity to complexity and vice versa: The interactions of elementary parts can give rise to sophisticated behavior, and yet in such behavior we sometimes see universal large-scale patterns.

“Complexity science was long deserving of a Nobel Prize,” says Serim Ilday, a professor at UNAM (National Nanotechnology Research Center), Bilkent University, Turkey. “It shows complex systems’ importance and argues that they can be understood. Previously, people were saying that complexity was just a buzzword. But if you methodically approach these systems, then you can really understand how they behave.”

Ilday, who runs the Simply Complex Lab, has come up with a methodical approach for controlling and measuring systems that look messy but aren’t. Her work is largely experimental but could change the way we develop new materials, treat disease, or even—just maybe—look for life on other planets.

Ilday likes to invoke a series of lithographs sketched by Pablo Picasso called “The Bull.” The first column in the array shows three semirealistic images of bulls. Each succeeding column removes detail, as the animals deteriorate into sparse sets of evocative lines—no more than what’s necessary to convey the bull’s form.

“Scientists often find complicated ways to explain simple phenomena,” Ilday says. She strips away excess, as Picasso did. “If you can understand the phenomenon with already-known theories, then you don’t need anything else.”

As an example, she points to her time as a graduate student. Scientists were stumped by the way a pile of nanoparticles transitions from a set of individual elements into a connected but confined nanoparticle network. She viewed them as a network, then reduced the dimensionality from three to two, and applied a well-understood framework from physics called percolation theory. “My adviser and colleagues were trying to understand it through a complicated chemical reaction mechanism,” she says. But the problems didn’t require chemistry—just basic physics. Now she’s applying physics to more types of problems.

“When I first joined the group, I was fascinated by the experimental platform that they had come up with,” says Ghaith Makey, a research scientist in her lab. “It looks simple, but it shows really complex behavior.”

“One shoots a laser at a dish of microscopic particles and records a video of the resulting motion,” Makey says. “You can see extremely exotic behavior without biochemistry. You feel the particles are alive.”

The particles can range in size and structure. They’re arranged in a quasi-two-dimensional pattern and suspended in fluid. Ilday’s team shines a laser at a point in the water which forms a hot spot. Temperature gradients cause convection and particles start to aggregate at the edge of the bubble, slowing nearby fluid and increasing the aggregation. The team records video of the particles through a microscope. They alter the laser’s power and location and then measure how the particles respond. They’ve shown that they can coax the particles to form many types of patterns.

The platform is aimed at uncovering basic modes of behavior in materials that are abstracted from any particular material or application. Could they use just a few “knobs” to induce the same ordered response in a variety of systems? 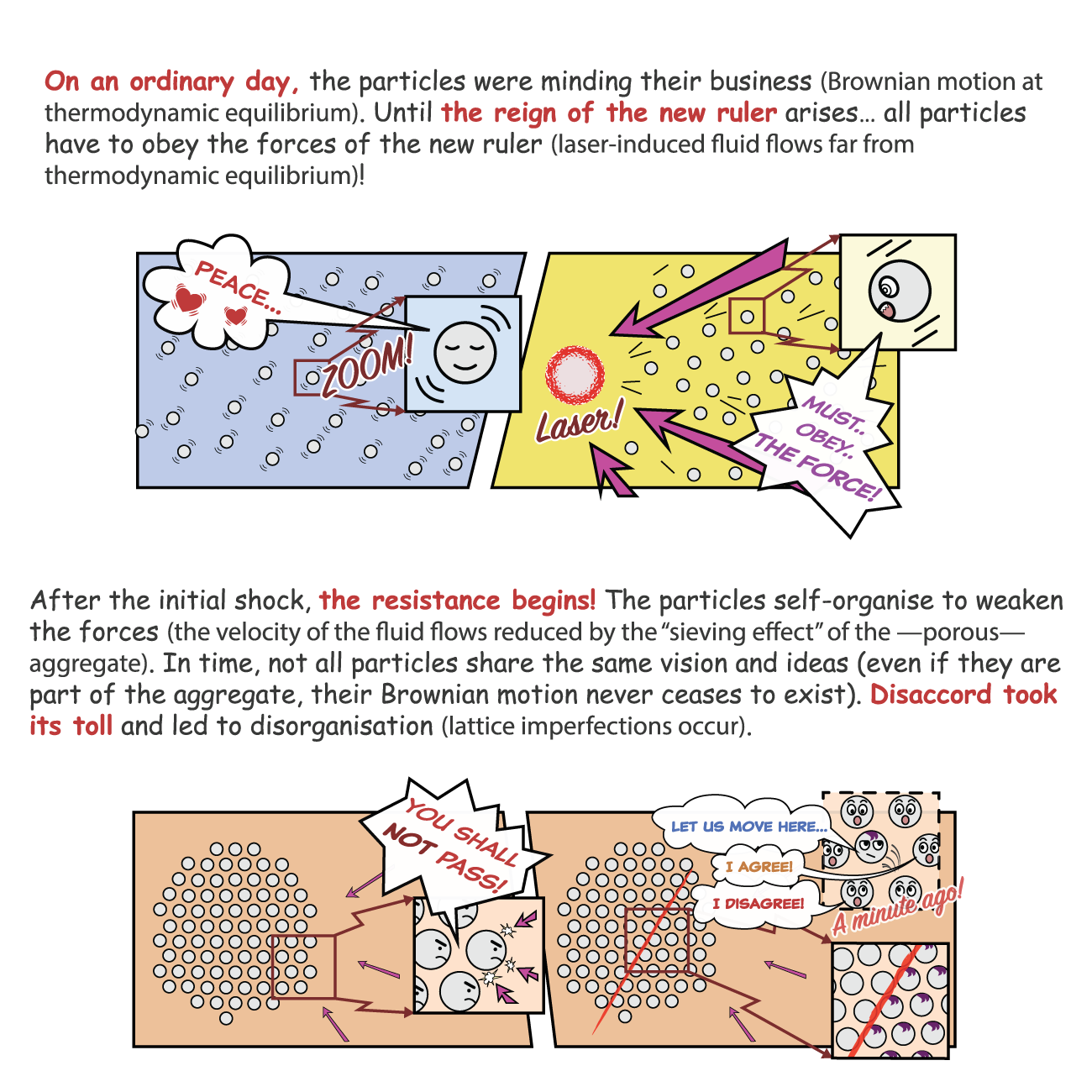 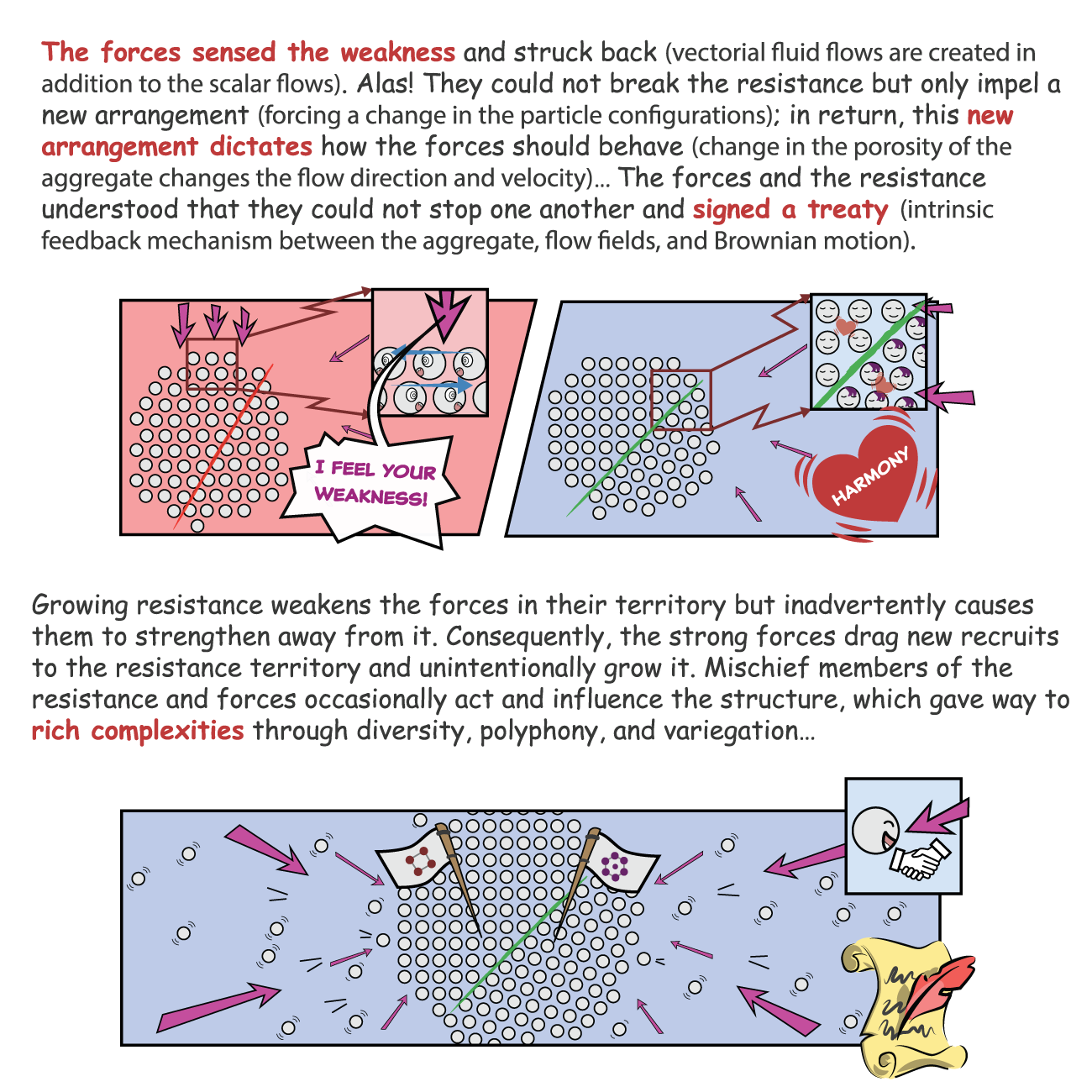 “Scientists often find complicated ways to explain simple phenomena. If you can understand the phenomenon with already-known theories, then you don’t need anything else.”

In 2020, Ilday’s team published a paper in Nature Physics describing the platform and some of their results. They looked at the behavior of six types of particles: “quantum dots” containing just a few hundred atoms each, tiny polystyrene spheres, two types of bacterial cells, yeast cells, and human breast cells. They ranged widely in size, shape, and structure, and yet they reacted similarly to the laser-induced thermal gradients. It turned out that particle details didn’t matter—the aggregation patterns were universal and controllable through a single laser. Simplicity in complexity.

The lab’s platform consists of more than the physical setup. The team also developed a computational toolbox, SCLAB. Their software first detects contrast in the video frames, then shapes, then the locations of particles. It calculates the distances between them, the packing density in different areas, particles’ velocities, and the overall orderliness according to different statistical measures.

They used MATLAB® throughout the process to control the laser, collect images from the camera, and perform data analysis, including image processing, statistical calculations, and machine learning. As an example of how much control they had over the laser—and the complex systems under observation—they used the laser to arrange particles into a star, the word “Hi!”, and a rotating rectangle, as described in their Nature Physics paper. Their images, produced using MATLAB, made the cover of the issue.

“The graphical user interface in MATLAB is one of its strongest points,” says Michaël Barbier, a research scientist in the lab. Some parts of the pipeline exist only in other programming languages, but Makey says, “The compatibility between MATLAB and other languages is very helpful.”

The team is increasingly using machine learning in their work. One task is particle detection. At first, they would manually tag particles in images, then use that as training data for a neural network. But manual annotation took too long, and the network’s performance wasn’t much better than that of programmed heuristics.

“The graphical user interface in MATLAB is one of its strongest points.” 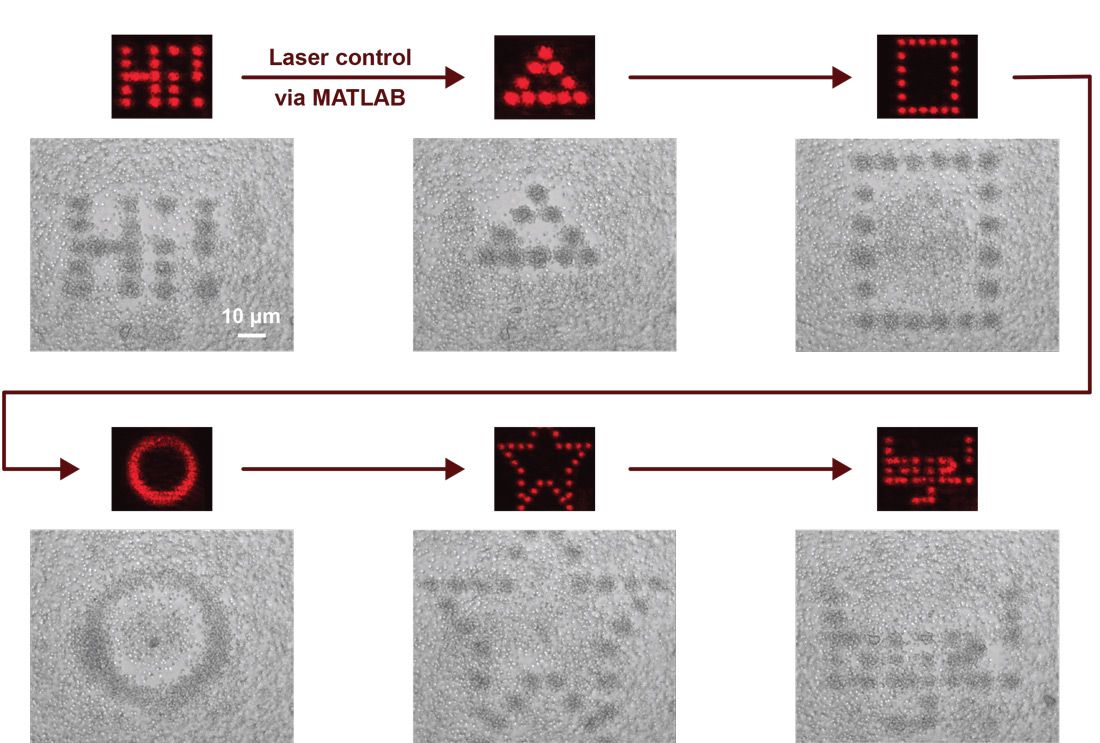 Now they synthesize training data. An algorithm creates thousands of fake images of particles for which it knows the “real” locations, and then another algorithm tweaks the images to make them look more natural. The team trains a neural network on these images and their known locations.

Another task is pattern detection. The team feeds the coordinates of particles, retrieved from the object-detection neural network, into an algorithm called a random forest, and it can determine if the particles are ordered. The researchers implement some of these steps in MATLAB and others in Python®. They use Turkey’s network of high-performance computers—the National High Performance and Grid Computing and Data Storage Center, or TRUBA—to run the algorithms in real time. All Turkish academics can now use their MATLAB licenses on TRUBA for computationally intensive calculations.

The lab team studies complexity from three angles: theory, simulation, and experimentation. MATLAB helps with all three by solving equations, performing simulations, and running and analyzing experiments. The lab has some idea of how particles should behave, and then they observe actual behavior. The researchers can then run simulations of the particles and try to match the observations. In the simulation, they can switch physical forces on and off to see which are necessary or tune various parameters. Once the team knows the crucial factors, they can formulate a theory of how various conditions lead to various behaviors.

“The circle is completed,” Barbier says. “And then you can go back to the experiments because you have more intuition of what is necessary.” Or the team might start with simulation—or with experiments, before trying to explain unexpected behavior. “These are actually three pillars of understanding what is going on around us,” Ilday says.

One kind of orderliness the team is looking for is called hyperuniformity. The particles are distributed evenly—too evenly. The lab explored hyperuniformity in a study published last year in Journal of Physics: Condensed Matter. They applied femtosecond laser pulses to a dish of polystyrene spheres, each a thousandth of a millimeter in diameter, floating in water. The particles started to arrange themselves into a repeating hexagonal pattern. Then they turned off the laser, and the hexagonal pattern disaggregated into a series of hyperuniform configurations before eventually oscillating in and out of a random distribution. Remarkably, the hyperuniformity lasted for over an hour, resisting the noise of “Brownian” motion, even without any continuing energy input. “This was very, very surprising,” Ilday says.

They’re trying to understand the phenomenon using theoretical models that don’t depict actual water. Instead, the models use formulas that abstractly represent the long-range interactions between particles floating in water. “We’re assuming that these particles are somehow sharing information based on their local density,” Ilday says. She likens the behavior to crowds at a concert. “If you have many people around you, you won’t be able to move freely, right? This is the same with the particles.”

The team measured hyperuniformity using a lot of different metrics and statistical calculations. Multiple graphs placed side by side depict different measures. “Why so many?” Barbier asks. “This field has not yet completely converged on which measures you should use.”

“Something that I dream of is unification of analysis methods, especially now that there is more interest in complex systems and aspects of their universality.”

Also, they are measuring dynamic versus static hyperuniformity. According to Ümmü Seleme Nizam, the first author of the hyperuniformity paper, “When you are a pilot or a doctor, you need to see many readings at the same time. We try to show multiple relevant measurements to make sure our conclusion is correct.”

Not everyone has to agree on the same metrics for the time being. The team believes in open science, and they upload not only their data but also their software toolboxes for others to use to reanalyze the data. And if the field does converge on similar metrics, open code will enable reproducibility. “Something that I dream of is unification of analysis methods,” Makey says, “especially now that there is more interest in complex systems and aspects of their universality.”

Hyperuniformity is more than just an interesting theoretical concept. It could have applications, such as in building materials. Imagine you have a light sensor. You want pixels distributed evenly, but if they’re perfectly periodic, then periodic light waves could combine with them to create unintended patterns. Hyperuniform pixels would solve that problem.

The lab has observed rich, lifelike behavior in purely physical and mathematical systems.

The research platform can also lend insight into cancer metastasis. Scientists understand what tumor cells do in source and target organs better than what they do in between. “We realized that our system is actually mimicking all the necessary conditions of circulation,” Ilday says.

Her team is currently writing a paper on how cells behave in narrow passages. “Then we thought that we can apply this to other living organisms as well,” she says. “So basically, we are driven from one question to another, which opens up many different fields.”

A more speculative area that excites Ilday is the origin of life. The fact that hyperuniformity persists after an energy source is removed suggests that a single application of energy might be enough for units to come together to form a stable nucleus, which ensure its future growth. Energy could create the building blocks needed for life to evolve. More broadly, life might not need biochemistry at all. The lab has observed rich, lifelike behavior in purely physical and mathematical systems. “I think life is simpler than assumed.” Ilday says. One implication: “You can look for life on other planets where the conditions don’t support biochemistry. But this requires another study.”

Building a Microscope That Sees with Helium

When You Know the Answer, Deep Learning Can Determine the Question