The Drillbotics™ competition challenges student teams from around the world to design, build, and operate a small rig that can autonomously drill a vertical wellbore through a rock sample. Teams are judged not only on how quickly they drill and the quality of the wellbore, but also on how much they learn in designing and building the rig. The competition, which is sponsored by the Drilling Systems Automation Technical Section (DSATS) of the Society of Petroleum Engineers (SPE), saw four teams advance to the final round in 2015 and five teams in 2016.

For 2014-2015, the inaugural year of the competition, our University of Texas at Austin (UT Austin) team reached the finals with our free-standing, autonomous design, dubbed nanoRIG. In the 2015-2016 competition, we were finalists again (Figure 1), successfully drilling through a 30-cm-square rock sample with nanoRIGv2. We implemented a real-time control system for nanoRIGv2 using Simulink®, Simulink Real-Time™, and Speedgoat target hardware. This was a significant improvement on the previous year’s design, which used a Windows® computer with a data acquisition module and hand-written C code. By leveraging Simulink, the team was able to spend more time improving hardware and testing control strategies rather than debugging low-level drivers. Drilling performance also improved through enhanced set point tracking and drilling optimization.

The Drillbotics rock sample contained multiple layers of unknown composition, some of which were angled, making vertical drilling difficult. Our real-time controller responded quickly to these changing conditions, enabling our rig to maintain a vertical wellbore and to maximize the rate of penetration (ROP) while sustaining a consistent drill speed and weight-on-bit (WOB). 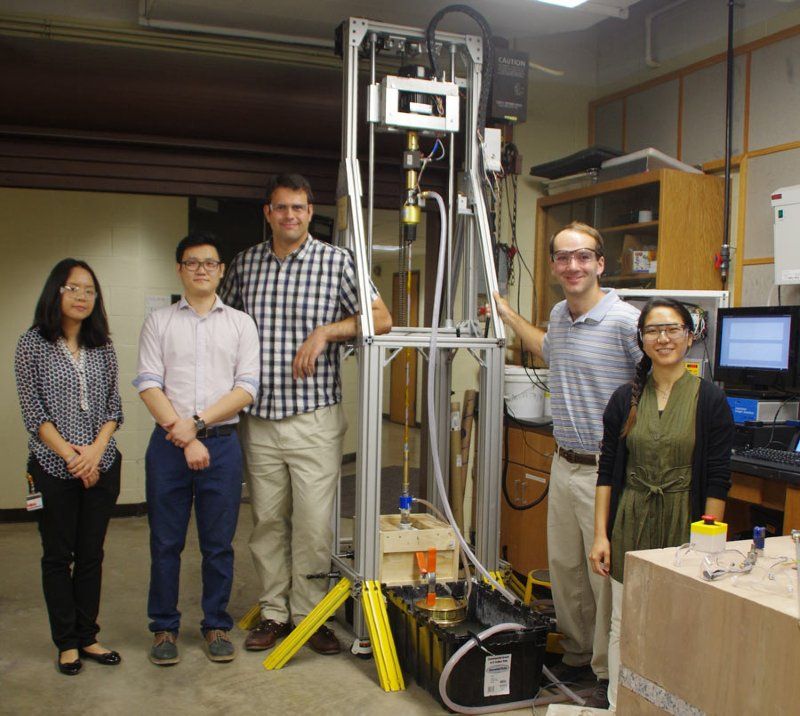 Constructing and Testing the Rig and Drill String

To construct nanoRIGv2, we reused many components from our first rig, including its structural frame, stepper motor, top drive, draw-works, and mud pump (Figure 2). To accommodate a smaller sample than was used for nanoRIG, we added a free-standing base, improved rig mobility, and an in-line drill string torque sensor, as well as sensors in the bottom hole assembly (BHA) of the drill string, including an accelerometer to measure vibrations (Figure 3). We performed calculations in MATLAB® to ensure that components in the new base would be strong enough to support the rig in operation. 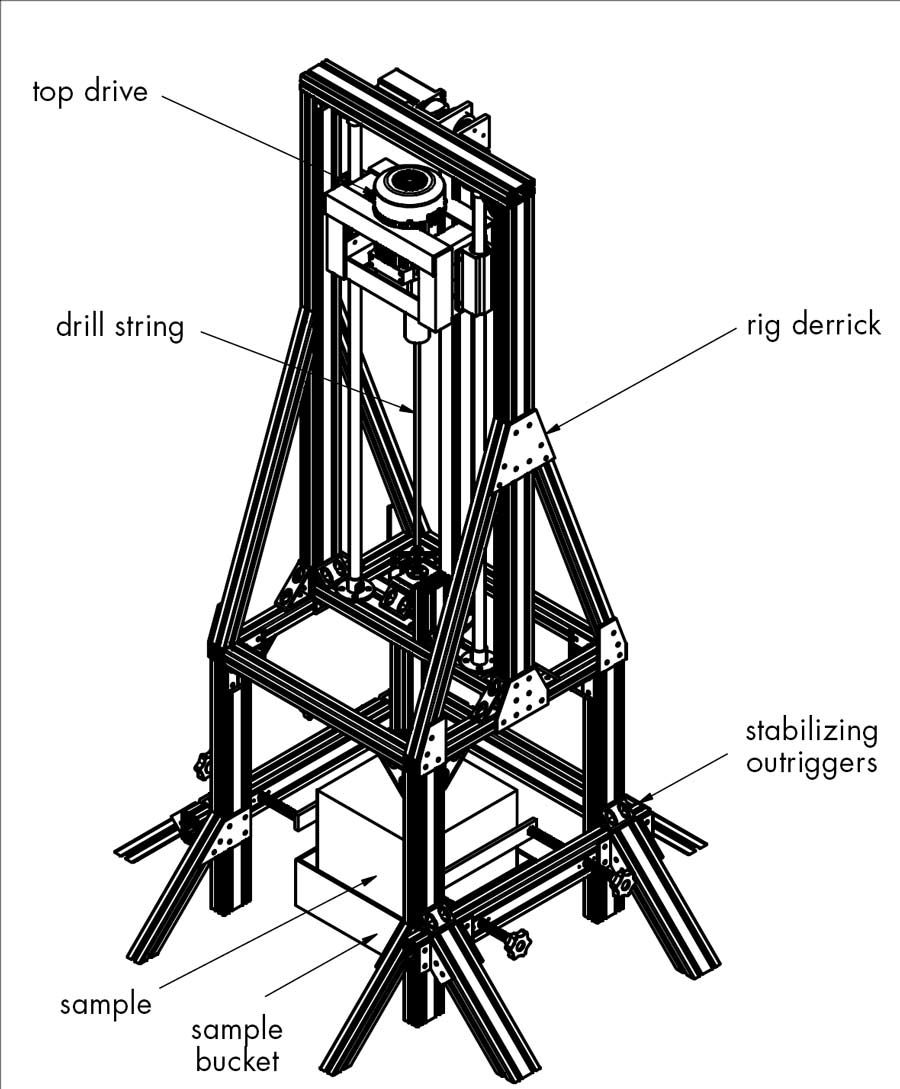 Figure 2. A schematic of nanoRIGv2. 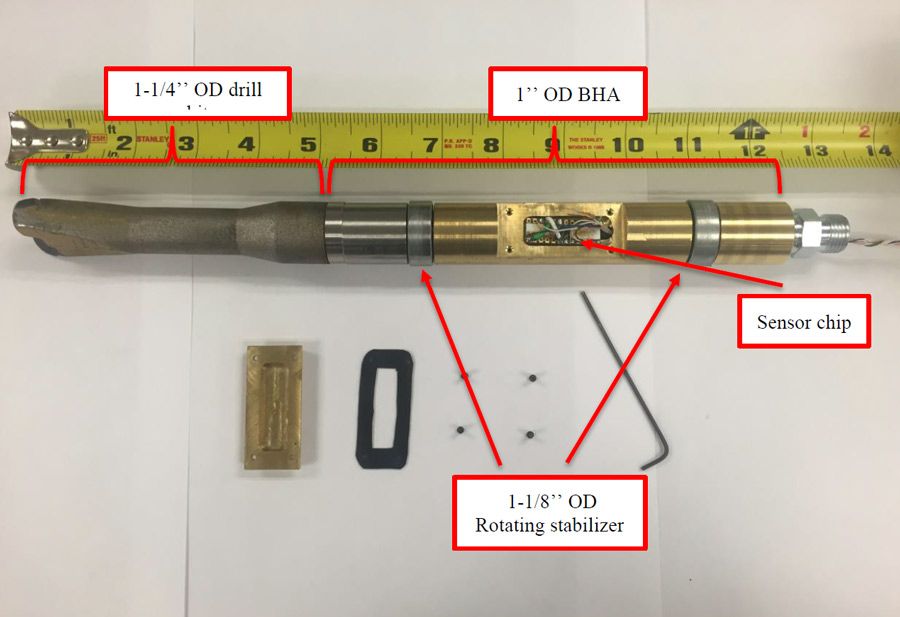 Figure 3. The bottom hole assembly with drill bit and stabilizers.

During early tests of the rig, we experimented with various combinations of WOB and motor RPM set points. The tests revealed an issue we had not anticipated: a structural resonance of the drill string occurred when the motor operated in the range of 170 - 320 RPMs, with the severity of the vibrations correlated to the WOB. We knew we would have to avoid this problematic RPM range during drilling.

One drawback of our original nanoRIG design was the relatively long (0.5 – 2 second) latency between sensor input and the control system’s response via motor actuation. With latencies of one second or longer, the system could not react quickly enough to changes in the rock layers. A second drawback was that bugs in our handwritten code occasionally caused the control software to crash. With nanoRIGv2, we wanted to minimize latency and eliminate the need to hand-write low-level control code and thus chose to work with Simulink Real-Time and a Speedgoat system.

The controller for nanoRIGv2 processes input from several sensors, including a strain gauge (for WOB calculations), a torque sensor, and an accelerometer in the BHA. Using this input, the controller generates analog voltages for the geared draw-works stepper motor, which raises and lowers the bit, and the top drive motor, which provides torque to the drill string. Each of these motors used internal controllers and provided near-instantaneous feedback to control inputs.

We modeled the controller in Simulink, adding filters to the strain gauge input to reduce noise caused by the stepper motor and by drilling vibrations. To manage the set points of the proportional and PID controllers, we implemented a supervisory controller as a simple state machine in MATLAB. This state machine defined the six operating modes: initializing, tripping in, tagging, drilling, tripping out, and stand by (Figure 4). A future implementation of the state machine will use Stateflow®; however, the initial implementation used a simple switch statement in an embedded MATLAB code block in our Simulink model. 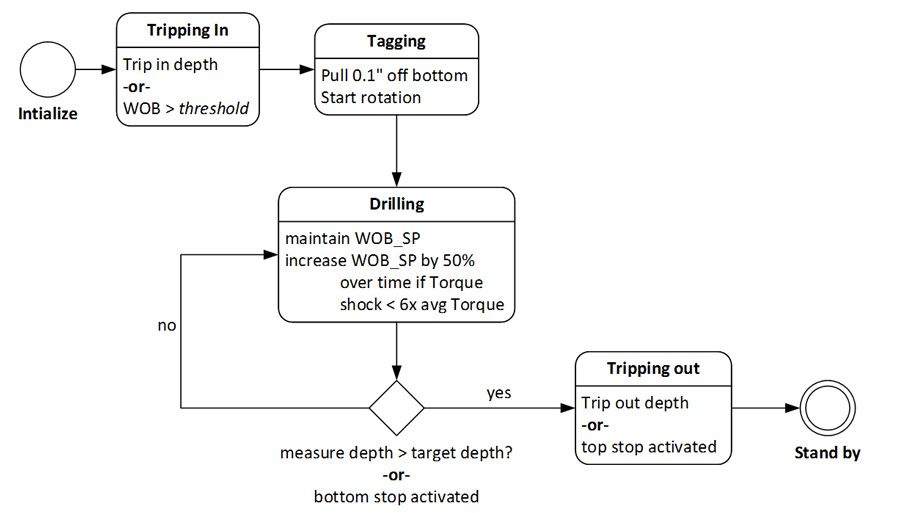 To help us monitor the system during drilling, we created two visualizations using MATLAB and Simulink. The first was a drilling state display showing the active state as well as current drilling data and set points.

The second, used in manual control of the rig, was a set of four dials for specifying the RPM and ROP set points as well as the trip in depth and drilling target depth. Figure 5 shows both of these displays, as well as an image from a monitoring webcam that we installed on the rig. By placing the webcam near the drill string, we could monitor drill string vibration and bending without having to approach moving machinery. 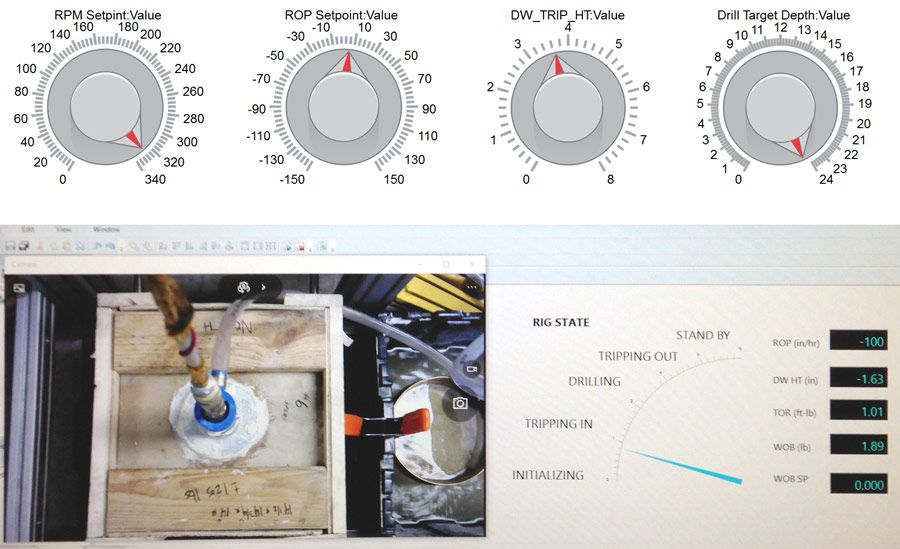 Testing with a Real-Time Controller

We tested our rig and controller on a rock sample of our own that had angled layers of limestone and sandstone, to emulate the competition sample. We generated real-time control software from our Simulink model using Simulink Real-Time, and ran the application on Speedgoat target hardware connected to the rig’s sensors and motors. As the supervisory control algorithm stepped through the rig’s operating states, the real-time application processed sensor inputs 1000 times per second and adjusted motor speeds as needed to maintain WOB and RPM set points.

On competition day, representatives from DSATS came to UT Austin to watch our rig in action. Following the competition requirements, we started at a conservative speed of 160 RPM to demonstrate that the system ran smoothly. We quickly cleared that safety check to the satisfaction of the judges and increased the speed to our designed 340 RPM. As a result, we improved our drilling rate from 0.5 cm per hour to almost 10 cm per hour. This increase in drilling speed demonstrated the controller’s ability to change states and adapt at a much faster rate. The judges commented that the Simulink visualizations of the rig states and performance helped them build confidence in the safety and behavior of the system.

The test went well, but we did hit some snags along the way. We had to restart the drilling process after discovering that the stabilizers in the BHA were too big for the wellhead we had installed. We also experienced data loss because we failed to account for the large file size that resulted from the hours-long drilling process.

Despite these minor setbacks, nanoRIGv2 successfully drilled a vertical hole through the entire rock sample. For each layer, the holes were straight and uniform with smooth, clean walls (Figure 6). This level of performance was possible because the control application we created with Simulink Real-Time reacted immediately to changes in the rock sample as the bit passed through layers of varying hardness and the air gaps between layers.

Planning for Next Year’s Competition

For next year’s competition, the DSATS committee has removed the WOB limit and increased the allowable horsepower of the motor from 2.5 HP to 25HP. Our team plans to use Simulink and Simulink Real-Time to develop an enhanced controller that will take advantage of the new guidelines while addressing aspects of our existing control design that we believe can be improved.

One of the main improvements we plan to make for the 2016-2017 Drillbotics competition is to utilize Stateflow for implementation of the supervisory state machine. We also plan to implement an automated process for determining optimal WOB and RPM value combinations as a response to changes in the drilling environment in order to maximize drilling rate and minimize drilling dysfunctions.

Roman is now an assistant professor at the University of Calgary, where he is forming a new Drillbotics team. This team, which plans to use Simulink for control design, will compete directly against the UT Austin team and others in the expanding Drillbotics competition for the 2016-2017 academic year.