Use Simulink and Simscape Electrical to model solar arrays, batteries, and the complete system and to run simulations for a variety of mission profiles

“With Simscape Electrical we created an integrated power system model that connects electrical and thermal domains, so we get the whole picture during our mission-level simulations. If we need to model the motors that turn the solar arrays, we have the capability to integrate those mechanical components, too.” 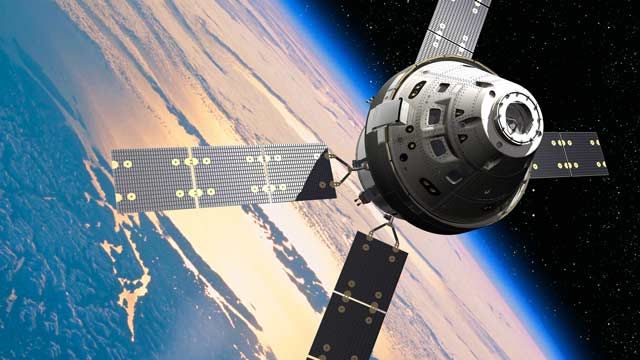 NASA’s Orion spacecraft will be capable of carrying humans to deep space destinations, including Mars. The Orion program has already successfully completed its Exploration Flight Test 1 (EFT-1) mission in Earth’s orbit, and Lockheed Martin engineers are working on the crew module for Exploration Mission 1 (EM-1), an unmanned flight around the moon.

“The multinode power model we created in Simulink enables us to run simulations with greater fidelity than was possible with the single-node model we used previously,” says Hector Hernandez, Orion lead power system analyst at Lockheed Martin. “Simscape Electrical made it easier to model the full power network and simulate more realistic behavior. We now have the capability to measure the voltage drops across various components, which gives us greater insight into power quality across the system.”

Several years ago, Lockheed Martin engineers developed a power system model for NASA’s Constellation program using Microsoft® Excel® and Visual Basic® for Applications (VBA). As engineers tried to examine more and more test cases, however, the model slowed and occasionally crashed. Because it was a single-node power model, the team could not use it to evaluate voltage drops throughout the system or to assess power quality requirements.

Lockheed Martin needed to create a multinode model of the Orion power system, including its power generation, storage, and distribution components, and then run simulations to validate the design, test fault conditions, verify system performance, and perform mission analysis. They wanted a visual model that their NASA colleagues would understand immediately, without having to examine low-level code. 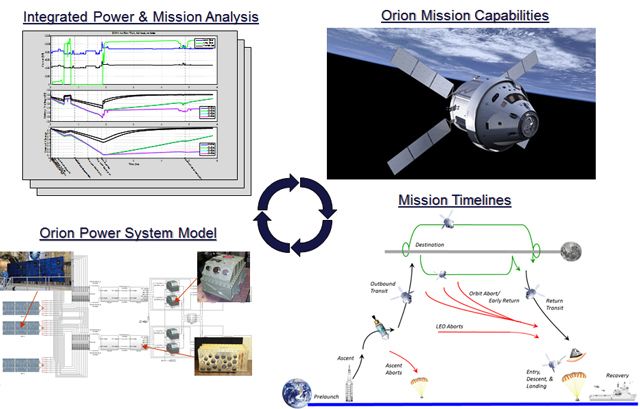 Lockheed Martin engineers used Simulink and Simscape Electrical to model and simulate the power system for the Orion spacecraft.

To model the solar arrays, the team created a custom solar cell model written in the Simscape™ language. To calculate an accurate current-voltage (IV) curve for the array, this model takes into account the number of cells per wing, pointing angles of the solar array, shadowing, and thermal effects such as solar, planetary infrared and albedo. Performance degradation factors such as radiation, contamination, and collisions with micrometeoroids and orbital debris were also considered.

Next, the team created a lithium-ion battery model using a combination of standard blocks from the Simscape Electrical component library and custom blocks developed using the Simscape language. The model accounts for battery hysteresis effects, temperature, and battery state of charge.

Continuing to work with the Simscape language, the team created a custom power load block  in order to simulate the varying loads generated by the spacecraft’s propulsion, guidance, and other systems as they switch on and off throughout a mission. Using the integrated power system model, the team ran simulations for a variety of mission profiles. They monitored mission and load changes to assess power impacts during development, simulated fault scenarios, including battery failures, stuck switches, and solar array failures in the ascent and orbit phases. The results were used to guide the development of mission opportunities and protocols for failure cases.

They also simulated numerous mission profiles to ensure that the solar arrays and batteries were sized correctly and to project how the power system would perform during hours-long eclipse scenarios. The inputs to these simulations were timelines of commanded system states and load profiles generated with MATLAB®.

Using MATLAB, the team postprocessed and visualized the simulation results, which they validated against results generated by NASA’s internal power system simulator for the International Space Station.