How to take the color grade from one image and apply it to another?

Joey Daermann on 28 Nov 2022
⋮
Edited: DGM on 28 Nov 2022
Accepted Answer: Image Analyst
Good Afternoon all,
I was wondering if its possible to take the colors of one image and apply them to another. I want to bascailly convert the theme.
Ive seen this done many times in photoshop for example in this video https://www.youtube.com/watch?v=epPOrHG6SnE .
What steps would i go about doing this in matlab if at all possible? Has anyone done this before?
Thank you all.

Image Analyst on 28 Nov 2022
⋮
Sorry but I don't think Walter's suggestion would work.
The best paper I've seen on this is
http://www.eyemaginary.com/Portfolio/ColorHistogramWarp.html
Sorry but I don't have code for that paper.

⋮
Moved: DGM on 28 Nov 2022
Correct this is along the lines of what I was looking for I will look into the paper and return if I found a solution.

⋮
Edited: Image Analyst on 28 Nov 2022
I made a stab at doing what he said but I only got partway until I got into some pretty complicated math for gamut warping that I didn't know to do in MATLAB. 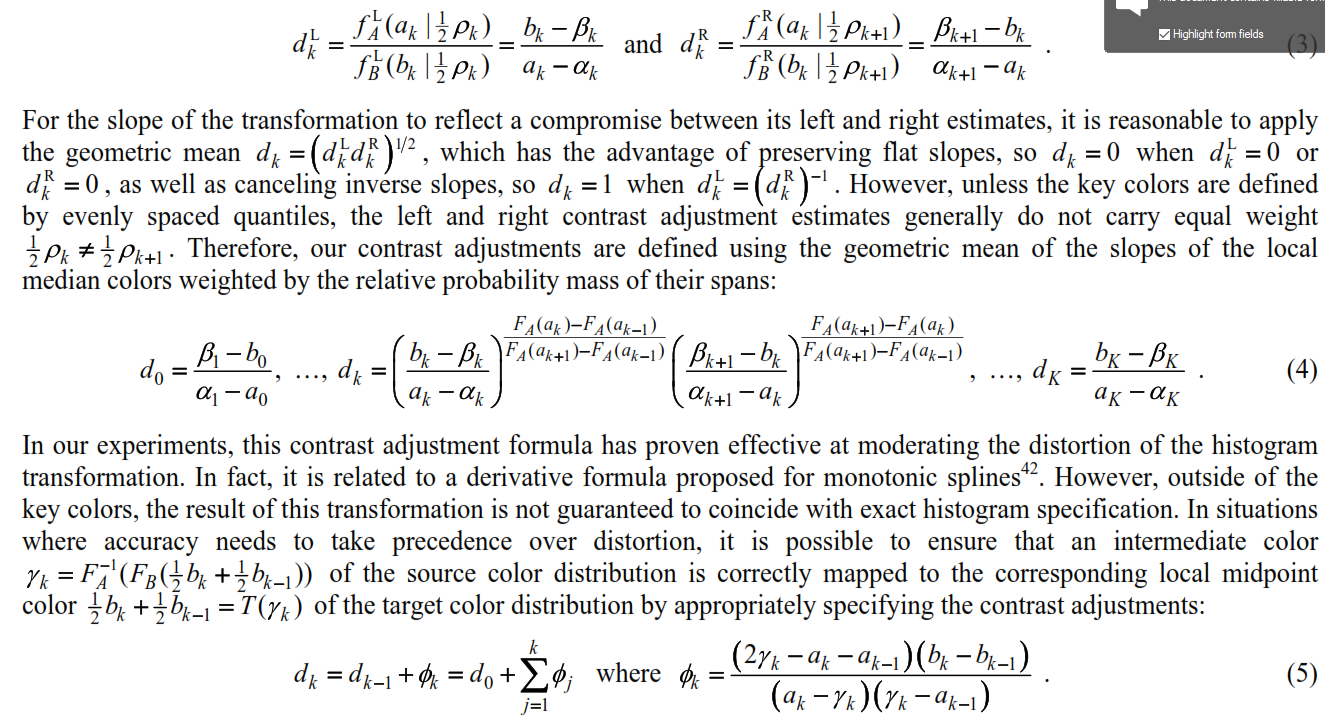 Walter Roberson on 28 Nov 2022
⋮
rgb2ind the base image and save the color map. Now rgb2ind the second image and ind2rgb passing in the saved colormap.

⋮
I wrote up a script to do what you mentioned and got the following results. In photoshot people often use just 3 colors and then blend them together. Do you think this could be possible in matlab? (Thank you for the reply btw)

⋮
the task is not well defined.
Suppose you took a 3d histogram of HSV. Sort by popularity. Create a cumulative sum so that given a fraction you can look up its associated color bin.
Now take the second image, so the same thing.
Now take the cumulative relative fractions in the second image and look them up against the first image's information to determine an hsv bin. Invert linear bin to hsv value.
If the first image was, for example, mostly pastel purple then the computed version of the second image would be too. However, it would definitely be subject abrupt transitions.

⋮
I forgot earlier that you can rgb2ind your base image and then rgb2ind the second image passing in the colormap from the first image and then ind2rgb back with the same map. The effect would be to substitute each color with the closest color that exists in the first image. But it does not have to appear much in the original image so this would not tend to shift palettes.

DGM on 28 Nov 2022
⋮
Edited: DGM on 28 Nov 2022
The paper that @Image Analyst linked is good, but I haven't seen any MATLAB implementation. You're free to post it on the File Exchange if you write one.
MIMT imrecolor() is about the closest thing, but it's nowhere near as good as that. Results may end up pretty terrible on photographs, but it was never meant to work on anything but abstract images. It's just an incremental improvement over a basic histogram matching as one would do with imhistmatch().
I wouldn't call it a color grading tool, but I might as well throw that out there. This comment references the paper that @Image Analyst linked and compares to the results using imrecolor() and imhistmatch().
https://www.mathworks.com/matlabcentral/answers/1574998-error-zoom-image-matlab#comment_1808943