how can i create a array of letters from a sentence

Saibala Sundram on 5 Apr 2020
⋮
Edited: dpb on 5 Apr 2020
Accepted Answer: dpb
"Here's to the crazy ones. The misfits. The rebels. The troublemakers. The round pegs in the square holes. The ones who see things differently. They're not fond of rules. And they have no respect for the status quo. You can quote them, disagree with them, glorify or vilify them. About the only thing you can't do is ignore them. Because they change things. They push the human race forward. And while some may see them as the crazy ones, we see genius. Because the people who are crazy enough to think they can change the world, are the ones who do."
for the above mentioned sentence i would like to obtain the shanon fano code. i tried to count the different entries of charecters.
%Shanon-Fano encoding
src=fopen('ShanonFanotext.txt');%text source
scan=fread(src);%source analysis
symb=unique(scan);%Obtainig info about distinguished charecters
span=length(symb);%No. of symbols used to construct the sentence.
%Obtaining probabilities of each symbols as per the occurences in source
for n=1:length(s3)
d(n,1)=length(find(scan==symb(n)))%frequencies of each symbol
end
Here the fread command just gives the binary output.
i want to carry out for alphabet letters as such a symbol.

⋮
I got this histogram. In the x axis is that asci values?

⋮
"In the x axis is that asci values?" Yes

⋮
I want the x axis to show the charecters itself
i tried using bar(char(edges),[N,nan]).

⋮
Just guessing has its limits:)
See xticklabels and Axes Properties
I found this code
% Change the labels for the tick marks on the x-axis
irisSpecies = {'Setosa', 'Virginica', 'Versicolor'};
set(gca, 'XTick', 1:3, 'XTickLabel', irisSpecies)
in "Errorbar Plot" at MATLAB Plot Gallery 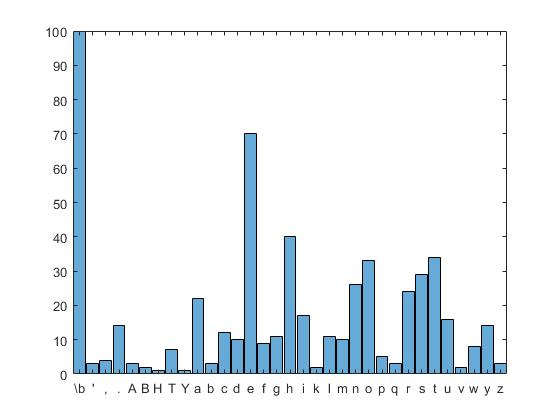