From the series: Using Qualified Tools in a DO-178C Development Process

Verification of executable object code spans several objectives in DO-178C.  Several types of testing methods are called out in DO-178C: Requirements-based hardware and software integration Testing, requirements-based software integration testing, and requirements-based low-level testing. While the hardware and software integration testing needs to be performed on the actual target hardware, DO-178C does allow for other test environments for the other testing. Simulink® and Embedded Coder® provide capabilities for processor-in-the-loop testing by allowing Simulink to connect to a target processor board that can then be tested as a block in Simulink. Simulink Test™ provides the capability to then re-run the simulation cases that were run on the model and reuse them to test the executable object code. Additionally, when Simulink Design Verifier™ is used to automatically generate tests from the model for missing low-level requirements coverage, those test cases are exported to Simulink Test and can then be run on the executable object code using processor-in-the-loop. An additional requirement in DO-178C is that code coverage needs to be assessed when verifying compliance to the high-level and low-level software requirements. Simulink Coverage™ provides code coverage assessment and it is integrated to run automatically when using Simulink Test. Code coverage can be run using software-in-the-loop testing on the host computer, or when using processor-in-the-loop on a target board. Two reports are provided by the tools: A test results report with pass/fail assessment and a code coverage report.  The DO Qualification Kit provides the necessary artifacts to qualify the generation of the test results report, pass/fail assessment, and code coverage reports.

Related Information
Learn more about the DO Qualification Kit 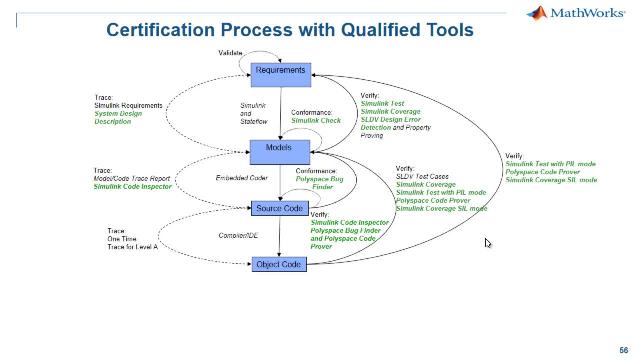