For four seasons, the three submerged buoys bobbing off the coast of Garden Island in Australia harnessed wave energy to generate electricity and fresh water for the country’s largest naval base. The 14,000 hours of cumulative operation logged on the project established a world record for a grid-connected wave energy system and proved the viability and reliability of CETO 5 wave energy technology.

Last year, Carnegie Clean Energy successfully completed the objectives of CETO 5 deployment, and we are now developing the next generation of this technology. CETO 6 has the potential to generate more than four times the electric power of CETO 5 per buoy while lowering maintenance costs and enabling the wave farm to be located farther from shore.

Our design for CETO 6 is based on a full-scale wave-to-wire model of the entire multidomain system that we are building with Simulink® and Simscape™. We have steadily increased the technology readiness level for CETO 6 by using Simulink simulations to rapidly try out new ideas and iteratively improve designs. We use Simulink to model and simulate each step in the power generation chain, including the mechanics involved when a wave acts on the buoy, the conversion of mechanical energy into hydraulic energy, and the conversion of hydraulic energy into electrical energy.

CETO technology uses the movement of buoys to harness wave energy and generate electrical energy. The CETO 5 buoys were 11 meters in diameter and were submerged about two meters below the ocean’s surface. Each buoy was connected via a tether to a hydraulic cylinder mounted on the sea floor. The vertical motion of the buoys drove a piston in the cylinder, creating pressure that forced water through underwater pipes to an onshore power generation facility (Figure 1). There, the high-pressure water was used to drive hydroelectric turbines to generate electricity and produce desalinated water through reverse osmosis. 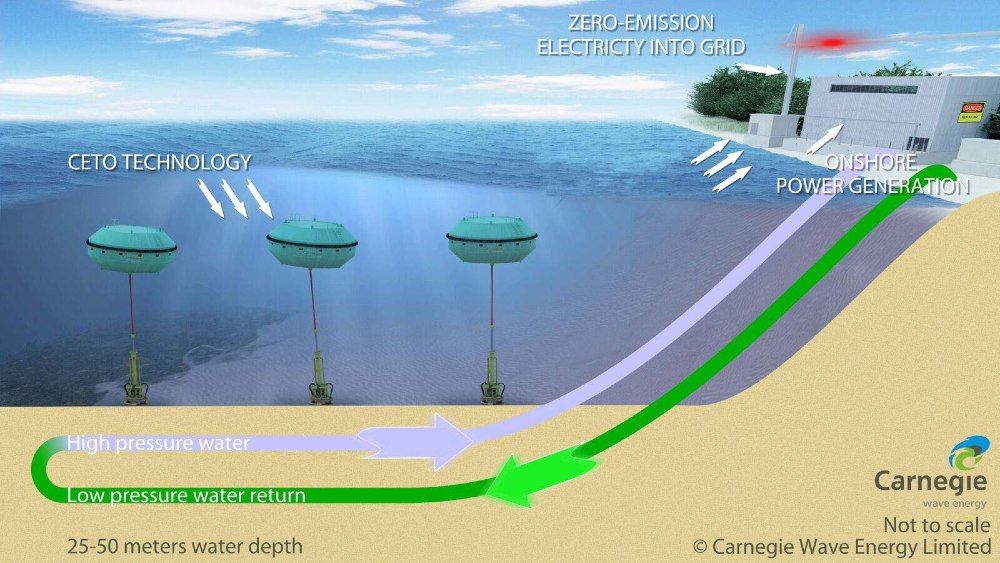 The year-long CETO 5 project not only proved the feasibility of the technology, it also provided us with a wealth of information that we are applying to CETO 6. CETO 5 was equipped with about 300 sensors that monitored pressures, flows, and temperatures in the hydraulic components; voltage and current frequency in the electrical components; and load, displacement, and acceleration of mechanical components. We analyzed and visualized the terabytes of data collected by the sensors in MATLAB®, using the results to inform our design decisions and validate our Simulink models (Figure 2). 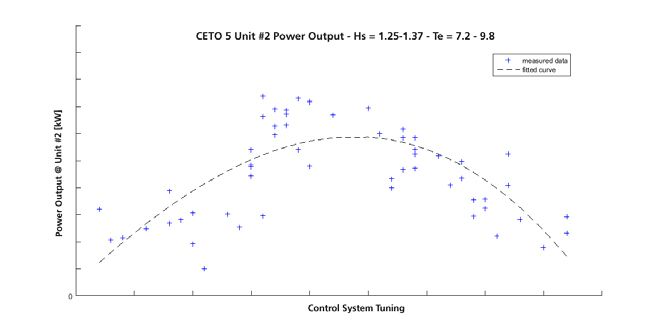 Figure 2. Plot of measured power output for the CETO 5 unit #2 as a function of a single control variable.

Our experience with CETO 5 highlighted opportunities for improving the structural design of CETO 6. We have increased the diameter of the buoys from 11 meters to almost 20 meters, and designed CETO 6 so that electrical power is generated at the buoy rather than on shore (Figure 3). 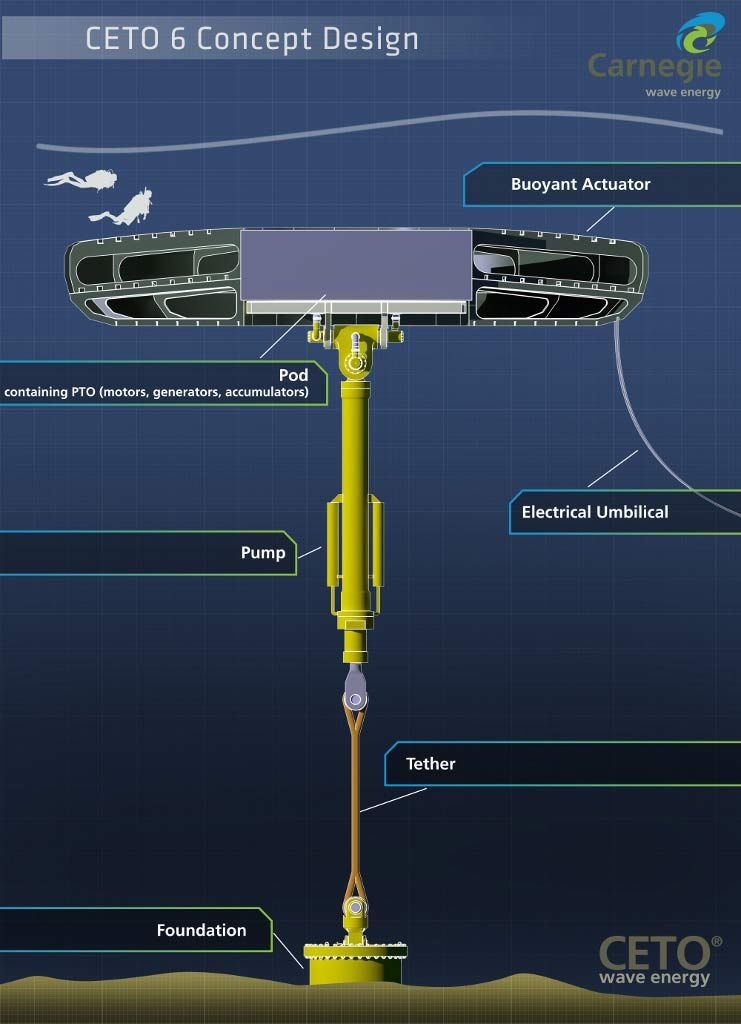 Figure 3. Diagram of a CETO 6 system.

Instead of installing and maintaining kilometers of high-pressure pipes between the wave farm and the shore, we can now use an electrical umbilical to carry the generated power to land, lowering the cost of the system and enabling us to deploy the buoys much farther out to sea, where wave conditions are often more favorable for power generation. In CETO 6, the hydraulic pump is mounted on the buoy instead of on the sea floor. This change makes it easier to make repairs and perform maintenance because we can tow the entire system back to shore instead of working underwater.

Modeling and Optimizing the Power-Takeoff

The heart of a CETO 6 system is the power takeoff, the subsystem that converts hydraulic energy from the pump into electrical energy. Our goal in designing the power-takeoff is to extract the maximum amount of available power from wave energy. From theoretical studies, we know how much power a perfectly efficient system could extract. Simulink models enabled us to configure and size a power takeoff subsystem that comes as close as possible to this ideal level of efficiency.

After modeling the mooring tether, linkages, and other mechanical components with Simscape Multibody™, we focused on the hydraulic subsystem. We created a complete model of this subsystem with Simulink and Simscape Fluids™ (Figure 4). The model includes multiple hydraulic accumulators, pipes, pressure release valves, and the hydraulic motor, which converts hydraulic pressure and flow into the torque that is used to drive the electric generator. 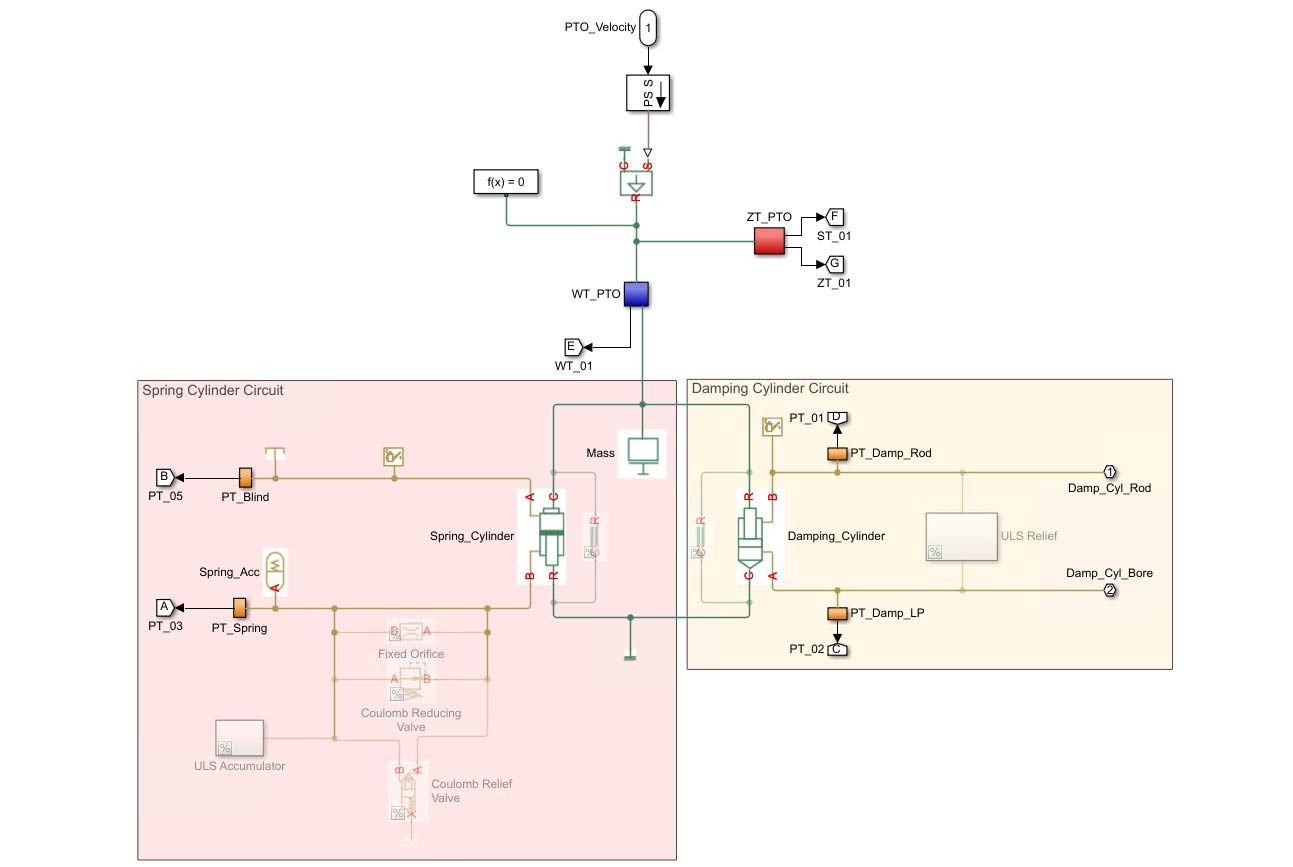 We ran tens of thousands of simulations in Simulink to optimize this design. We ran sweeps to find optimal configurations and parameter values, running them concurrently on a multicore processor using Parallel Computing Toolbox™. The simulations yielded some unexpected insights. For example, they revealed that a particular control parameter, which we assumed would need to vary significantly depending on the sea state, actually had little effect on performance, regardless of sea state. This insight enabled us to simplify our design and reduce the overall cost of the system.

To test our early designs, we constructed a 1:20 scale version of the CETO 6 system and placed it in a wave tank, where we exposed it to carefully controlled wave conditions (Figure 5). During the tests we gathered data from sensors, as we had done with the real-world CETO 5 deployment, and analyzed the sensor data in MATLAB. 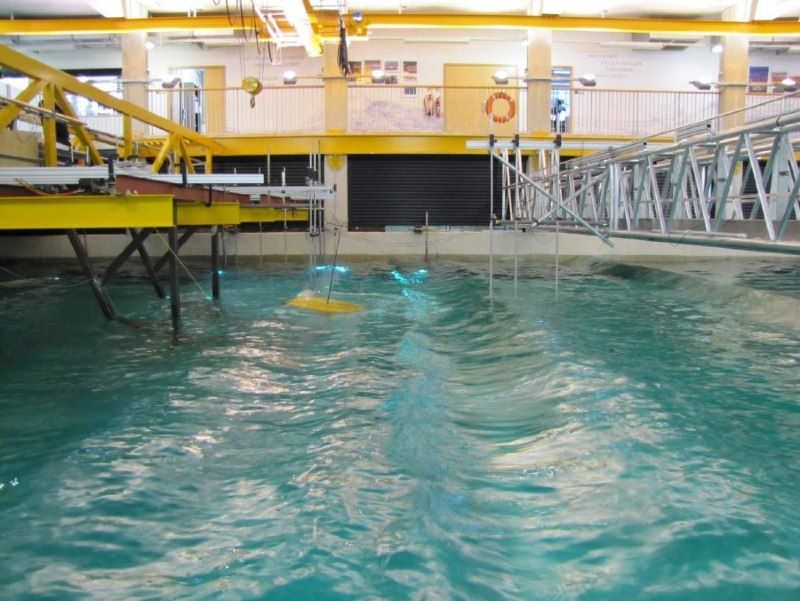 Figure 5. The scale prototype in the wave tank.

In preparation for developing a complete wave-to-wire model, we are using Simscape Electrical™ to model the electrical components of the system, including the generator and capacitors, which will be used for power smoothing. At the other end of the system, we have created a custom Simulink hydrodynamic model for simulating the interaction of the buoy with ocean waves. We now have an opportunity to transition from this custom model to WEC-SIM, an open-source wave energy converter simulation tool that is becoming more widely used across our industry. WEC-SIM was developed by the National Renewable Energy Laboratory (NREL) and Sandia National Laboratories using MATLAB, Simulink, and Simscape Multibody, which will make it easy to integrate into our workflow.

CETO 6 Deployment and Beyond

Carnegie Clean Energy plans to deploy a grid-connected CETO 6 system at the Wave Hub marine energy development and testing facility located 16 km off the coast of Cornwall, in the UK (Figure 6). 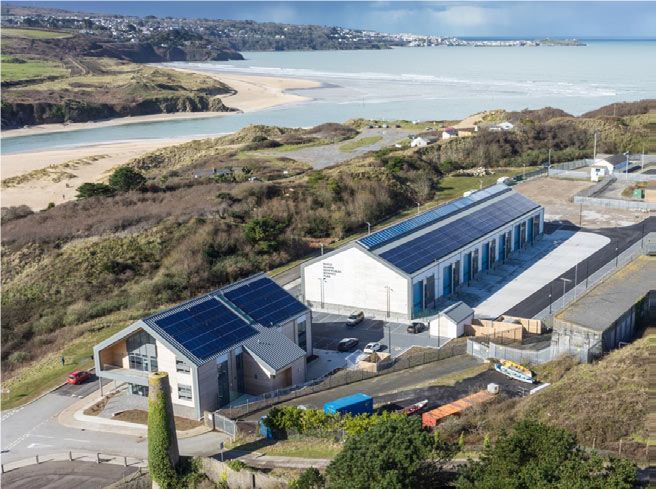 We have also received a commitment from our local government for funding to deploy a wave energy farm off the coast of Albany in Western Australia.

As we work toward those deployments, we continue to explore ways to improve CETO 6 technology. One improvement that we are currently evaluating is related to the optimization of the mooring configuration that is holding the buoy. The current CETO 6 vertical mooring line mainly captures energy from the buoy’s heave motion (Figure 7). 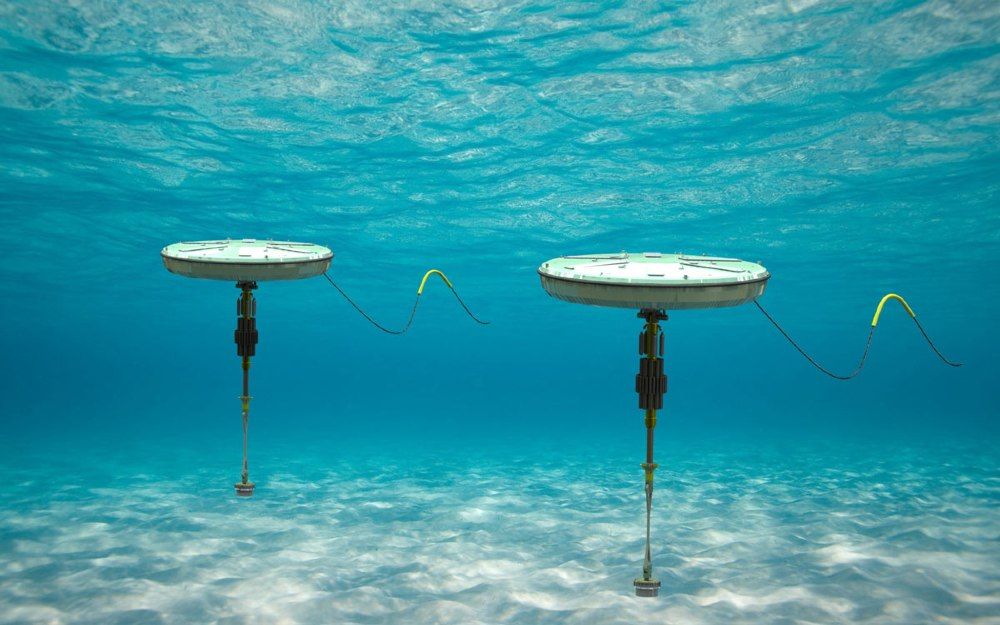 This new configuration would capture pitch and surge motion, as well, potentially tripling the power output. Finally, with our company’s recent expansion into microgrids, we are working on integrating CETO 6 wave energy technology with solar power and energy storage systems with the goal of developing and operating the world’s first wave-solar-battery microgrid.