“Our typical software control projects take two years to create requirements, generate code, and get a vehicle operating in a stable form. We cut that time in half with the help of MathWorks tools." 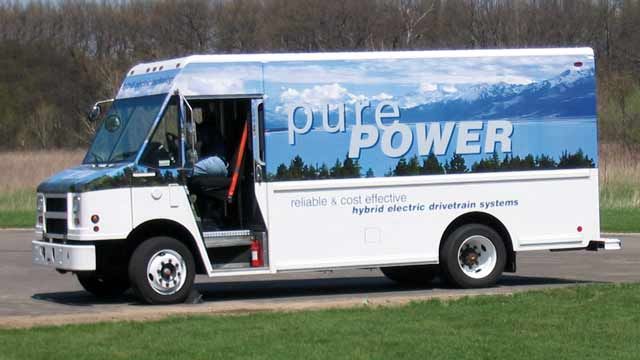 To reduce toxic air contaminants, a leading freight carrier issued a challenge to drivetrain manufacturers: retrofit one of our standard delivery vehicles to reduce emissions by 90% and improve fuel economy by 50%.

More than 20 manufacturers competed in the contest, including Eaton Corporation, a global $8.1 billion diversified industrial manufacturer that also develops intelligent drivetrain systems that boost fuel economy and safety in trucks. Eaton combined a diesel engine with an electric motor to create a hybrid electric powertrain that reduces emissions and fuel consumption while maintaining the vehicle’s original operating functions and performance.

Eaton exceeded the project goals and cut a year from the development time with the assistance of MathWorks tools for Model-Based Design. They won the competition and surpassed the target goals set by the freight carrier.

"We met all our project goals by building the control system for a low-emission powertrain in half the time," says Jeffrey Carpenter, senior chief engineer at Eaton Corporation.

Eaton set out to create their first single-shaft parallel hybrid construction, which gives the driver the flexibility to perform electric-only vehicle launches and conserves fuel. The series of hybrids developed to that point had no connection between the diesel engine and the vehicle wheels.

To reduce customer integration costs, the system would need to work with any OEM’s chassis, engine, or clutch.

Creating the hybrid involved revolutionizing the way the vehicles had been developed to date. Eaton would therefore need to validate their algorithms early in development. They would also need to automatically generate code to meet the one-year deadline.

Faced with an aggressive deadline, and knowing they would need the flexibility to adapt requirements quickly, Eaton chose to apply Model-Based Design with MathWorks tools.

A team of Eaton engineers designed and simulated a model of the control scheme architecture with Simulink® software that included energy management, subsystems of the engine, the clutch, the battery, the motor, and other vehicle components.

“The beauty of model architecture in Simulink,” Carpenter says, “is that if any of the vehicle components change, we simply modify those blocks, and the overall system is not affected.”

They then created a plant model to simulate all the inputs and outputs that the hybrid control module would use to communicate with the real vehicle components. They used Simulink Coder™ to generate C code from the Simulink model and downloaded the code onto Simulink Real-Time™ for hardware-in-the-loop simulations.

“Essentially, we had a working vehicle on our PC, so whenever we wanted to adjust or make improvements, we could run a simulation in our PC environment,” Carpenter says.

Eaton used Simulink to enhance the model’s performance and Optimization Toolbox™ to determine the optimal emissions and fuel economy.

After validating their results on the PC against the actual I/O by running hardware-in-the-loop simulations, Eaton developed a prototype controller. They created one model, consisting of the Simulink architecture, the operating system, and the hardware abstraction layer (HAL), which includes the drivers on the chipset of the board. They developed an operating system to interface between the HAL coded in C and the Simulink model, using Stateflow® and Simulink Coder as a scheduler in the operating system.

Using Embedded Coder®, Eaton generated C code from the model and downloaded the code onto a Freescale™ MPC5xx microcontroller for real-time operation in the freight carrier’s ECU.

With the competition won, Eaton began building 20 hybrid test vehicles in 2004. The vehicles have since been deployed in several cities across the United States for real-world testing by the freight carrier, which has more than 40,000 conventional delivery vehicles on the road. Plans are in place to introduce more hybrid test vehicles into the fleet over time.