Use Simulink and Simscape Multibody to create an accurate digital twin that supports design optimization, fault testing, and predictive maintenance

“Simulations of the digital twin in Simulink enabled us to obtain data and insights that would be either impossible to get via hardware tests or simply too costly and time-consuming. Visualizing forces and moments helped us to understand the effects of individual components on a highly dynamic robot.” 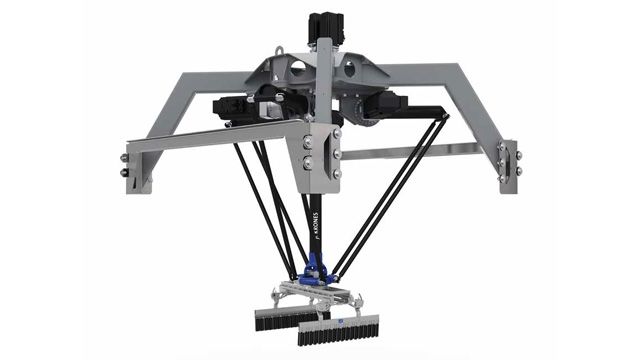 The Krones Robobox is a fully automated system that turns, positions, and groups packs of bottled beverages for palletization. Krones recently redesigned the system to increase its output and flexibility and to reduce maintenance requirements. The Robobox T-GS, which incorporates a tripod robot with a parallel kinematic design, is capable of grouping packs into predefined layer patterns at a rate of 500 layers per hour.

Krones engineers used Simulink® and Simscape Multibody™ to develop a digital twin of the tripod robot. They used this digital twin to run simulations that helped inform design decisions. Now that the redesigned system is in production, they use the digital twin to support predictive maintenance and diagnose operational issues.

“The digital twin we created in Simulink and Simscape Multibody enabled us to optimize our hardware design and shorten development and testing times,” says Thomas Albrecht, head of Analytics and Simulations at Krones. Benedikt Böttcher, Research and Development engineer at Krones, adds, “Today, we are using this model in the test phase of Robobox T-GS systems—for example, by running simulations using logged data to quickly optimize the system behavior or to identify wear-related system changes.”

In addition to modeling and simulating the tripod robot itself, Krones needed to model key elements of the environment in which it would operate. Unlike pick-and-place robots, the Robobox T-GS works by sliding packages across a moving conveyor belt. As a result, simulations had to account for friction, the force of gravity, the moments of inertia of the motors, and contact forces, including contact forces between the packages and the belt.

Krones engineers used Simulink and Simscape Multibody to develop a digital twin for modeling and simulating the Robobox T-GS tripod robot. The team developed a model of the tripod robot by importing geometry and inertia data from STEP files exported from CAD software.

The engineers built the plant model in Simulink and Simscape Multibody, adding motor drives and incorporating friction, contact forces, and other environmental effects.

They improved the accuracy of the model by using Simulink Design Optimization™ to fit model parameters to experimental data collected from tests of the real tripod robot. For example, they automatically estimated parameters such as the friction moments of the bearings and the friction coefficient between the packs and conveyor belts.

During simulations the team injected faults, such as extremely high friction, to analyze system behavior under fault conditions.

The engineers used the simulation results as inputs to finite element method (FEM) tools for conducting stress and vibration analyses on the frame and other components.

They used the tripod robot model to train a machine learning classification algorithm for predictive maintenance. This algorithm analyzes the sensor data of the real robot online and can detect failures before they occur.