Inside a circle, the solution u(r, θ) combines rn cos(nθ) and rn sin(nθ). The boundary solution combines all entries in a Fourier series to match the boundary conditions.

OK. So this is using Fourier series. So I had to pick an equation where we were given a function, and not just a couple of initial values. So I made the equation a partial differential equation. The most famous one, Laplace's equation.

So this is the setup. And you'll see how Fourier series comes in. We're in a circle. I'm going to make this a nice model problem.

In this problem I'm going to put a source of heat at that point. So it'll be a point source. A delta function. And on the rest of the boundary, temperature 0. So the boundary function is a delta function with a spike at that one point, and 0 elsewhere.

And our problem is to solve the Laplace's equation inside the circle. And we use polar coordinates because we've got a circle. So there is the equation with x and y, but we really are thinking r and theta. And the reason is, you get beautiful solutions to this equation using r and theta.

And that was a family of solutions. r to the n-th cos n theta just works. And so does r to the n-th sine n theta. And that's for every n.

So we have-- we can combine. We have a linear equation. We can take combinations of solutions with coefficients a n in the cosines, and bn in the sines.

So you see our job. That function, that boundary condition, is supposed to tell us the a's and the b's. And then we have our solution.

And I have an easy time to find the coefficients a n of the cosines. Actually, we did that directly from the formula for the a n's. Let me just remember that formula. The formula was a0 was 1 over 2 pi times the average.

Isn't that a little weird? The temperature 0 except at one point. At that point it's a delta function with the coefficient 1 outside it. And then we get 1 over 2 pi as the average.

The other a n's, the coefficients of the cosines, are 1 over pi, times the integral of our delta function, times cos n theta d theta. And the delta function, that point source, picks out that number at theta equals 0. And that number is 1. So I'm getting 1 over pi. So finally I now know the a's and b's.

So you see what happens. When r is 1, we have the Fourier series for the delta function. That's the very exceptional function that's given on the boundary.

Let me just be sure I got that right. Yep, looks good. Looks good.

This is what you should do. We have a formula for all r and theta, but let's look at some particular points to see what's happening.

And now 1 minus r will factor out of this. And I think we get 1 plus r. And we still have a 1 minus r down below. I like that. You don't often, for partial differential equations, get some nice expression for the solution. So that's the solution.

And at r equals 0, I have 1 over 2 pi. Well, of course. It's the average value. Right at the center that temperature is going to be the average on the boundary.

So that's, you see, a use of the Fourier series. For one particular function. I could do another function, but I don't think I will.

I could take the function that's 1 on the top of the circle and minus 1 on the bottom half of the circle. OK, that's a function with a jump, but not a delta function. So we would see a Fourier series that would give us the a's and the b's. There would probably only be b's in that case. Sine. Sine terms. And we'd get an answer.

May I just, while I'm talking about averages, add one final comment. Usually, for a complicated region, we can't solve Laplace's equation with formulas. It's not possible. We can't find sines and cosines that match some crazy boundary.

And then at each point on the grid, we have an equation connecting the value of u at that point. Say u0 at the center. With u east, maybe, u west, u north, and u south.

So that'll be true at-- that equation will hold. The unknowns are all these u's. The u's of all the mesh points. And I have an equation at every mesh point.

So I have the same number of equations from the mesh points as unknowns at the mesh points. I solve that big system, and that gives me a solution u. An approximate solution u to Laplace's equation. So this would be called Laplace's difference equation, or Laplace's five-point scheme, because it uses five points in that average.

OK. That's an important problem in numerical analysis. Thank you. 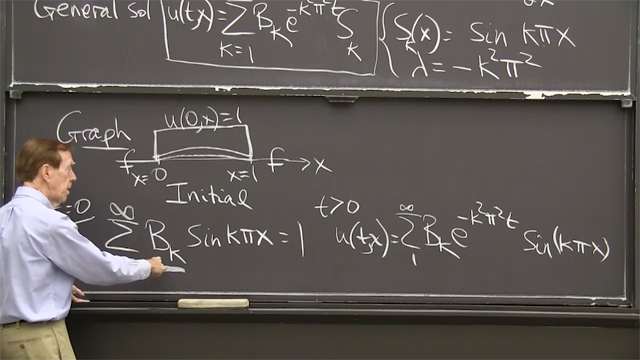