From the series: Understanding Control Systems

Discover the components of a feedback control system and how they interact with each other. Learn basic terminology by walking through examples that include driving a car manually and using cruise control.

The examples explore how driving a car manually or using cruise control forms a feedback control system. The video provides insights into the components and terminology in control systems, such as plants, actuators, sensors, and the desired output. You will learn about disturbance signals, which act on the plant and cause undesired effects on the output. You’ll also learn about noise, which is an unwanted signal that can enter the system through measurement.

You’re invited to a party and don’t want to miss a minute of it. You want to get there as fast as possible but without exceeding the speed limit, which is 50 mph. In order to get to the party as soon as possible, you’ll need to maintain your speed at 50 mph.

You may not have noticed it before but actually you drive your car in closed loop. Let’s first identify the components of this closed-loop system and then we’ll learn the basic terminology. When you step on the gas pedal, your car’s speed starts to change. You know that you want to be going 50 mph, let’s show your desired speed on the plot with green. Notice that it remains constant over time. Next, you look at the speedometer to see at what speed you are. Let’s show the monitored speed on this plot. Then you compare it to what you want. This is done by finding the difference between the desired and monitored speed. And it is called the error. Based on the error you make a decision. In this case, the error is not zero, therefore you decide to apply more gas to get to your desired speed. And this in turn influences the speed of the car. The smaller the error gets, the less gas you apply. And once you get to the desired speed, you keep your foot still on the gas pedal to maintain your speed.

Oh, I see, you’ve already started dreaming. I’m sorry to interrupt but let’s go back to reality. Now that we identified the components, let’s talk about how they are referred in control theory. In a feedback control system, the goal is to control the output to a desired value and that value is referred as desired output. Other common terms are reference and setpoint. The object whose output you try to control is called the plant. The output of the plant is measured by the component called the sensor and the measured output is then compared to the desired output. The difference between the desired and measured output is the error. Based on the computed error, the controller decides on the control action. And it commands an input, which is then sent to the actuator. The actuator is how the controller influences the plant. In some situations, you’ll see that the actuator, sensor, and plant dynamics are merged into one and referred to as the “plant”.

This may sound pessimistic but life is far from perfect, sometimes things may go wrong. For our example here, it is the road grade. Imagine you’re going uphill. Your speed will start to drop due to the hill and you will need to press down further on the gas pedal to maintain your speed. Unexpected environmental changes causing the system output to behave in an undesired way, such as the road grade in this example, is called “disturbance”. Similarly, a sticky gas pedal, icy roads, or windy weather act as disturbance on the car. Another thing that may go wrong is related to measurement. While you’re monitoring the speed, what if your vision is a little blurry because you forgot your glasses at home? The speed you’re monitoring becomes noisy and fluctuates between values. This is referred as “noise,” which is an unwanted signal affecting your measured output value.

Driving manually makes you tired? Cruise control can make your life easier. Let’s see how this system can be converted to an automatic control system. Now instead of monitoring the speed manually, you can have a device that provides an electronic measurement of the speed. Your brain was acting as a controller. Now, the engine control unit becomes the controller that computes a control action based on the error. The actuator now becomes a mechanical device that does what your foot used to do. In this case, the actuator is a motor that moves the gas pedal pedal up and down based on the voltage computed by the controller. Now that you have the cruise controller fully engaged, enjoy your ride to the party! 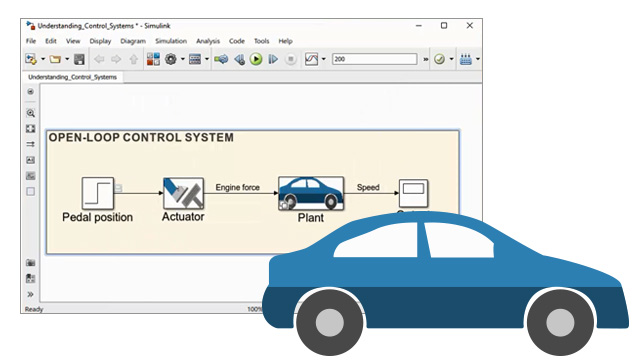