Use MATLAB to create financial models and algorithms for valuation, risk assessment, and fair value calculation and then use MATLAB Production Server to deploy them into the existing IT infrastructure

“MATLAB, MATLAB Production Server, and MathWorks Training Services enabled people on our risk team with conditional programming experience in C++ or Java to efficiently develop a core library for financial analysis and then deploy it as a web application, making it available to production systems in our enterprise environment.” 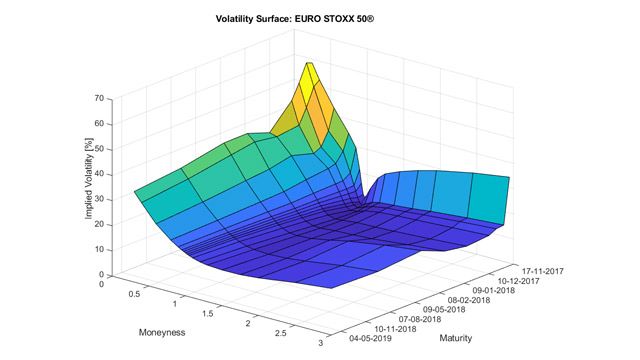 With about 140 billion Euros under management and administration, Helaba Invest is a leader in institutional asset management in the German market. The company works with banks, insurance companies, foundations, and other institutions.

At the heart of Helaba Invest’s quantitative risk management and valuation approach is a library of mathematical models developed in MATLAB® and deployed company-wide using MATLAB Production Server™. Analysts and managers at the company rely on these models for product valuation, pricing, risk assessment, regulatory compliance, and other applications.

“One big advantage of MATLAB is that it lets us apply our department's knowledge and expertise to develop our own financial models and other components, rather than rely on black-box systems from other companies,” says Marcus Veltum, team lead for risk assessment at Helaba Invest. “We can then use MATLAB Production Server to deploy them, enabling IT colleagues who have deeper knowledge of Java, C++, and .NET to integrate them into enterprise applications.”

Initially, Helaba Invest considered purchasing third-party software for risk assessment and other financial calculations, including some to service the German Regulation on Derivatives and the Alternative Investment Fund Managers Directive (AIFMD), a key regulatory requirement. In addition to the expense, the lack of flexibility and transparency in this software was a significant drawback. A black-box solution did not allow the team to see how calculations were being performed or to modify the algorithms. They decided to develop their own models.

With limited experience in traditional programming languages, object-oriented principles, or IT system deployment, the team needed custom training to develop the skills they would need to build the software. Once they had developed the models, the team needed to make them available to analysts throughout the company and to other systems in the company’s IT infrastructure, which includes an Oracle database and investment management software.

Helaba Invest used MATLAB and MATLAB Production Server to build a core library of financial models and algorithms and integrate it with existing enterprise applications.

Working in MATLAB with Financial Toolbox™ and Financial Instruments Toolbox™, the team developed models and algorithms for calculating price sensitivities; product valuations; risk measures such as “Greeks,” value-at-risk, and maximum drawdown; and the fair value of 300 portfolios with more than 5000 derivatives.

After using the models and algorithms locally in a desktop environment, the team began preparing to deploy them into the company’s IT environment as a shared library. At this stage, the team participated in customized, onsite training conducted by MathWorks Training Services. The training included multiday sessions on parallel computing, object-oriented programming in MATLAB, and deploying MATLAB applications using MATLAB Production Server with a focus on Java® and .NET interfaces. 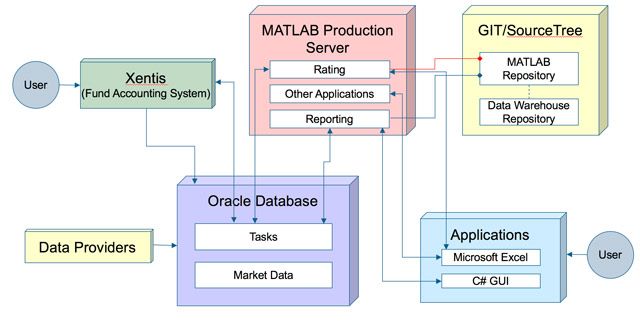 Using Parallel Computing Toolbox™, the team accelerated their computationally intensive calculations by executing them concurrently on the server’s 20 processing cores.

After verifying their deployment in the development instance of MATLAB Production Server, the team moved it to the test instance, where it was formally tested by an independent team within Helaba Invest.

Once the deployed models and algorithms had passed formal testing, the Helaba Invest IT team moved them to the production instance of MATLAB Production Server, where they can be accessed in the enterprise IT environment.

Hundreds of external customers and dozens of internal analysts are currently using the production core library in the background via various front-end applications. The library is accessed directly by individual analysts via a Microsoft® Excel® add-in and via the company’s investment management software. It is also used to generate web reports for customers via a Java interface to the Oracle® database, and services Helaba’s compliance with the AIFMD. 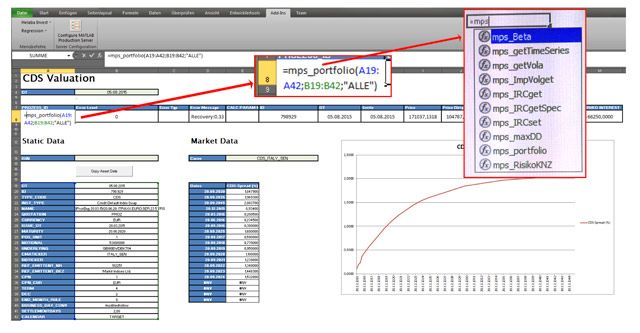