This example shows how to train a German to English language translator using a recurrent sequence-to-sequence encoder-decoder model with attention.

Recurrent encoder-decoder models have proven successful at tasks such as abstractive text summarization and neural machine translation. These models consist of an encoder, which typically processes input data with a recurrent layer such as an LSTM layer, and a decoder which maps the encoded input into the desired output, typically also with a recurrent layer. Models that incorporate attention mechanisms into the models allow the decoder to focus on parts of the encoded input while generating the translation one time step at a time. This example implements Bahdanau attention [1] using the custom layer attentionLayer, attached to this example as a supporting file. To access this layer, open this example as a live script.

This diagram shows the structure of a language translation model. The input text, specified as a sequence of words, is passed through the encoder, which outputs an encoded version of the input sequence and a hidden state used to initialize the decoder state. The decoder makes predictions one word at a time using previous prediction as input and also outputs update state and context values.

For more information and the details about the encoder and decoder networks used in this example, see the Define Encoder and Decoder Networks section of the example.

Predicting the most likely word for each step in the sequence can lead to suboptimal results. Any incorrect predictions can cause even more incorrect predictions in later time steps. For example, for the target text "An eagle flew by.", if the decoder predicts the first word of a translation as "A", then the probability of predicting "eagle" for the next word becomes much more unlikely because of the low probability of the phrase "a eagle" appearing in English text. The translation generation process differs for training and prediction. This example uses different approaches to stabilize training and the predictions:

This example shows how to load and preprocess text data to train a German to English language translator, define the encoder and decoder networks, train the model using a custom training loop, and generate translations using beam search.

Note: Language translation is a computationally intensive task. Training on the full data set used in this example can take many hours to run. To make the example run quicker, you can reduce training time at the cost of accuracy of predictions with previously unseen data by discarding a portion of the training data. Removing observations can speed up training because it reduces the amount of data to process in an epoch and reduces the vocabulary size of the training data.

Download and extract the English-German Tab-delimited Bilingual Sentence Pairs data set. The data comes from http://www.manythings.org/anki and https://tatoeba.org, and is provided under the Tatoeba Terms of Use and the CC-BY license.

Create a table that contains the sentence pairs specified as strings. Read the tab-delimited sentences pairs using readtable. Specify the German text as the source and the English text as the target.

View the first few sentence pairs in the data.

Training on the full dataset can take a long time to run. To reduce training time at the cost of accuracy, you can discard a portion of the training data. Removing observations can speed up training because it reduces the amount of data to process in an epoch as well as reducing the vocabulary size of the training data.

Discard a portion of the data according to the discardProp variable defined at the start of the example. Note that discarding large amounts of data negatively affects the accuracy of the learned model. For more accurate results, reduce the amount of discarded data by setting discardProp to a lower value.

View the number of remaining observations.

Split the data into training and test partitions containing 90% and 10% of the data, respectively.

View the first few rows of the training data.

View the number of training observations.

Create a wordEncoding object that maps tokens to a numeric index and vice versa using a vocabulary.

Convert the target data to sequences using the same steps.

View the vocabulary sizes of the source and target encodings.

This diagram shows the structure of a language translation model. The input text, specified as a sequence of words, is passed through the encoder, which outputs an encoded version of the input sequence and a hidden state used to initialize the decoder state. The decoder makes predictions one word at a time using previous the prediction as input and also outputs updated state and context values.

Create the encoder and decoder networks using the languageTranslationLayers function, attached to this example as a supporting file. To access this function, open the example as a live script.

For the encoder network, the languageTranslationLayers function defines a simple network consisting of an embedding layer followed by an LSTM layer. An embedding operation converts categorical tokens into numeric vectors, where the numeric vectors are learned by the network.

For the decoder network, the languageTranslationLayers function defines a network that passes the input data concatenated with the input context through an LSTM layer, and takes the updated hidden state and the encoder output and passes it through an attention mechanism to determine the context vector. The LSTM output and the context vector are then concatenated and passed through a fully connected and a softmax layer for classification.

Create the encoder and decoder networks using the languageTranslationLayers function, attached to this example as a supporting file. To access this function, open the example as a live script. Specify an embedding dimension of 128, and 128 hidden units in the LSTM layers.

To train the network in a custom training loop, convert the encoder and decoder networks to dlnetwork objects.

The decoder has multiple outputs including the context output of the attention layer, which is also passed to another layer. Specify the network outputs using the OutputNames property of the decoder dlnetwork object.

Create the function modelGradients, listed in the Model Gradients Function section of the example, which takes as input the encoder and decoder model parameters, a mini-batch of input data and the padding masks corresponding to the input data, and the dropout probability and returns the gradients of the loss with respect to the learnable parameters in the models and the corresponding loss.

Initialize the options for Adam optimization.

Train using SortaGrad [3], which is a strategy to improve training of ragged sequences by training for one epoch with the sequences sorted by sequence then shuffling once per epoch thereafter.

Create a mini-batch queue to automatically prepare mini-batches for training.

For the encoder and decoder networks, initialize the values for Adam optimization.

Create an array of values for scheduled sampling.

Train the model. For each iteration:

At the end of each epoch, shuffle the mini-batch queue.

For large data sets, training can take many hours to run.

Add the word encodings to the netBest structure and save the structure in a MAT file.

Extract the best network from netBest.

To evaluate the quality of the translations, use the BiLingual Evaluation Understudy (BLEU) scoring algorithm [4].

Translate the test data using the translateText function listed at the end of the example.

View a random selection of the test source text, target text, and predicted translations in a table.

To evaluate the quality of the translations using the BLEU similarity score, first preprocess the text data using the same steps as for training. Specify empty start and stop tokens, as these are not used in the translation.

The bleuEvaluationScore function, by default, evaluates the similarity scores by comparing n-grams of length one through four (multiword phrases with four or fewer words or single words). If the candidate or reference documents have fewer than four tokens, then the resulting BLEU evaluation score is zero. To ensure that bleuEvaluationScore returns nonzero scores for these short candidate documents, set the n-gram weights to a vector with fewer elements than the number of words in candidate.

Determine the length of the shortest candidate document.

If the shortest document has fewer than four tokens, then set the n-gram weights to a vector with a length matching the shortest document with equal weights that sum to one. Otherwise, specify n-gram weights of [0.25 0.25 0.25 0.25]. Note that if minLength is 1 (and consequently the n-gram weights is also 1), then the bleuEvaluationScore function can return less meaningful results as it only compares individual words (unigrams) and does not compare any n-grams (multiword phrases).

Calculate the BLEU evaluation scores by iterating over the translations and using the bleuEvaluationScore function.

Visualize the BLEU evaluation scores in a histogram.

View a table of some of the best translations.

View a table of some of the worst translations.

Translate the text using the translateText, function listed at the end of the example.

This diagram shows the structure of an example beam search with beam index . For each prediction, the top three sequences are maintained.

The beamSearch function takes as input the input data dlX, the encoder and decoder networks, and the target word encoding, and returns the predicted translated words using the beam search algorithm with a beam index of 3 and a maximum sequence length of 10. You can also specify optional arguments using name-value arguments:

The translateText function takes as input the encoder and decoder networks, an input string, and source and target word encodings and returns the translated text.

The modelGradients function takes as input the encoder network, decoder network, mini-batches of predictors dlX, targets dlT, padding mask corresponding to the targets maskT, and value for scheduled sampling. The function returns the gradients of the loss with respect to the learnable parameters in the networks gradientsE and gradientsD, the corresponding loss, and the decoder predictions dlYPred encoded as sequences of one-hot vectors.

The decoderPredictions function takes as input, the decoder network, the encoder output dlZ, the targets dlT, the decoder input hidden and cell state values, and the value for scheduled sampling.

The decoder makes predictions one time step at a time. At each time step, the input is randomly selected according to the value for scheduled sampling. In particular, the function uses the target value as input with probability and uses the previous prediction otherwise.

The sparseCrossEntropy function calculates the cross-entropy loss between the predictions dlY and targets dlT with the target mask maskT, where dlY is an array of probabilities and dlT is encoded as a sequence of integer values.

The preprocessText function preprocesses the input text for translation by converting the text to lowercase, adding start and stop tokens, and tokenizing.

The preprocessMiniBatch function preprocesses tokenized documents for training. The function encodes mini-batches of documents as sequences of numeric indices and pads the sequences to have the same length.

The preprocessPredictors function preprocesses source documents for training or prediction. The function encodes an array of tokenized documents as sequences of numeric indices. 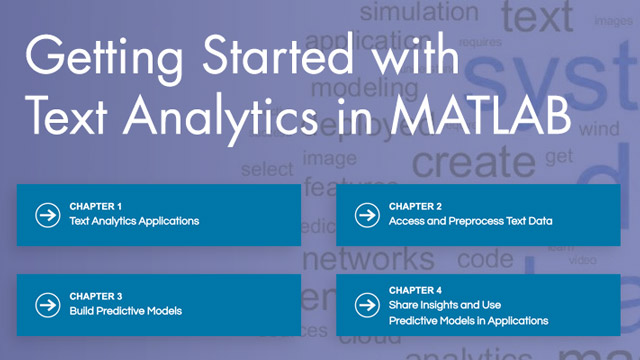 Getting Started with Text Analytics in MATLAB