Generating a combination matrix within a certain condition

Fabrício on 16 Sep 2022
⋮
Edited: Fabrício on 19 Sep 2022
Accepted Answer: Bruno Luong
Ran in:
I have a cell array with 1 to 10 vectors, with 1 to 40 numbers in each of them (all positive integers lower than 60), and I have to combine one value from each vector to a row in a matrix to produce a combination per column. I'm using combvec(cellarray{:}) to make the matrix but it consumes too much memory. I do have a condition that, for an exemple, reduces a matrix with 8892490 columns to 15744 but I can only use those conditions after assigning the matrix. The real condition is similar to a simple one like booleancomb = sum(matrix,1)<30 .
I tried generating the matrix to a matfile and then using the condition to get a logical array to the columns I actually want but I can't get only those columns out of a matfile...I also tried to change my data to single or uint but combvec always gives me double values.
The main thing I'm searching for is a less memory consuming way to manage this, if it uses others resources that would be fine.
I'm new to matlab so if you have any thoughts I would really appreciate!
% Vectors to be combined
cellarray{1} = [0 1 2 3];
cellarray{2} = [0 1 2];
combinations = combvec(cellarray{:}); % Uses too much memory
booleancomb = sum(combinations,1)<3; % Condition
disp(combinations(:,booleancomb))
0 1 2 0 1 0 0 0 0 1 1 2

⋮
I think this should work perfectly, this monday I can test in the real project and tell for sure. Thank you very much!

⋮
Edited: Fabrício on 19 Sep 2022
This approach is super fast! One of the best pros is that it basicaly doesn't matter how big each vector from the cellarray is, it takes the same run time. If the input smax is limiting enough you could run a really large cellarray with it. Thank you Bruno!
*Update: Just tested in my project and it works really well with the inputs I have. Since I have a very limiting smax, even if I keep my data as double it barely uses any RAM. Just one thing to keep in mind, if someone else is going to use Bruno's function, don't forget to apply smax limit for situations when the cellarray has only 1 vector.

⋮
This really improved how far I could go with the amount of combinations and solved the class problem, now using 8 times less memory, but I wonder if there is a way to apply the condition in this... The range of combinations I need is so much smaller than the whole matrix.
But your answer helped me a lot! Thank you Jan. 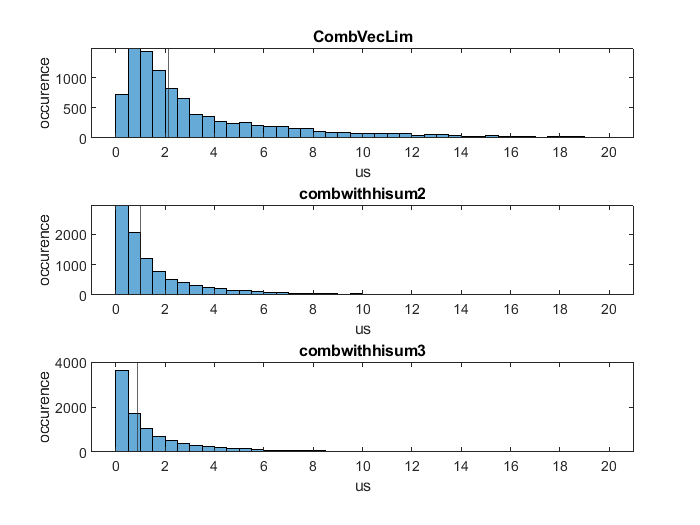 The median time is
The test script is attached

⋮
@Bruno Luong: Thank you for this interesting speed test. For higher limits, the timings looks different:
% Inserted in your benchcombveclim.m
cellarray = cell(1,10);
for k=1:length(cellarray)
cellarray{k} = uint8(1:3+randi(3));
end
smax = 50;
This removes a small number of columns only. Then I get the median times (R2018b, i5 2 Core):
0.3581571 CombVecLim
0.77851085 combwithhisum2
0.8181776 combwithhisum3
For lower limits the smart power of your combwithhisum is impressing. Thanks for sharing this code.
On the other hand I'm surprised, that the speed of the very simple CombVecLim is comparable and not a magnitude slower.

⋮
"This removes a small number of columns only"
I see, it remove almost nothing. The mean of 1:3+randi(3) is 3. sum of 10 those must have mean of 30 of standard deviation not bery large. The smax = 50 is too hight and have very little effect.

⋮
@Bruno Luong: Exactly: If none or almost none columns are removed, the smart method to avoid to produce them loses its power.
On the other hand the speed depends on the input data:
cellarray = cell(1,10);
for k=1:length(cellarray)
% Your data: cellarray{k} = randi(10,1,3+randi(3),'uint8');
cellarray{k} = uint8(1:3+randi(3));
end
smax = 30;
With these data CombVecLim needs about 60% of the time used by combwithhisum2, which is slighly faster than combwithhisum3.
But for
cellarray{k} = randi(10,1,3+randi(20),'uint8');
smax = 20;
combwithhisum3 is 4 times faster than CombVecLim3.
CombVecLim3 is an improved version, which avoids to compute the sum repeatedly, but uses the result of the former iteration. In addition it does not create the full matrix y to remove the unwanted limits afterwards, but collects the wanted columns only:
function y = CombVecLim3(Lim, varargin)
if nargin < 2
y = [];
return;
end
y = varargin{1};
s = y; % Current sum
if ~isfloat(y) && Lim >= intmax(class(y))
s = double(y); % Care for saturation of integers
Lim = double(Lim);
end
for k = 2:nargin - 1
z = varargin{k}; % Next vector from inputs
a = repmat( y, 1, width(z)); % Multiple blocks of existing data
b = repelem(z, 1, width(y)); % Repeated elements of this vector
s = repmat(s, 1, width(z)) + b; % Sum over all columns
m = s < Lim; % Mask for accepted columns
if all(m) % Include all columns
y = [a; b];
else % Include masked columns only
s = s(m);
y = [a(:, m); b(m)];
end
end
end
Of course, this is less charming than the compact former version.
According to my measurements under R2018b your combwithhisum3 is twice as fast for
cellarray{k} = randi(10,1,3+randi(10),'uint8');
smax = 20;
and has the same speed for:
cellarray{k} = randi(10,1,3+randi(5),'uint8');
smax = 40;
One problem remains: For UINT8 input and Lim=255 the criterion sum(y,1)<Lim is fragile due to the saturation of integers.
I really like your smart and elegant solution. Reading it is like contemplating classic art. And I had some fun and insights with providing the naive approach myCombVecLim and the dull one CombVecLim, which is even fast for some kinds of inputs. The OP has some methods to check, which one works with the data at best. And all provided solutions are much faster than Matlab's combvec. I'll write an enhancement request.
This thread became a useful tutorial about how to solve a combination problem with limited column sums and how to compare the different approachs.