⋮
The original question was: 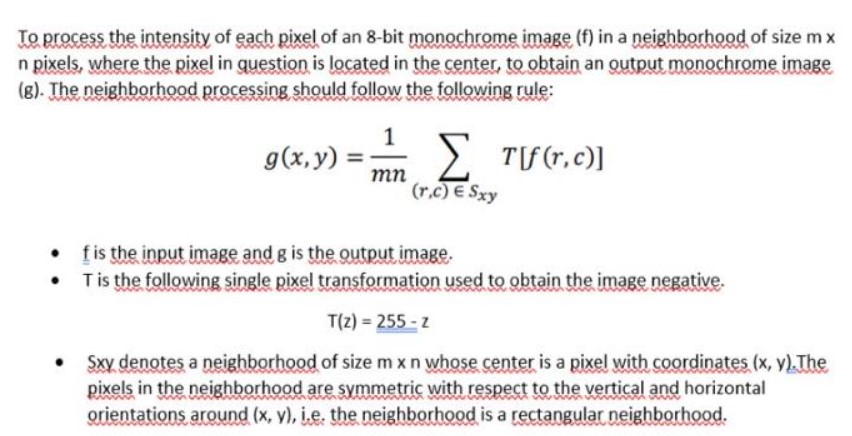 DGM on 26 Nov 2022
⋮
Edited: DGM on 26 Nov 2022
There are countless sliding window filter examples here. I'm not going to write another.
I don't have much patience for assignments that avoid opportunities to teach basic lessons. It's a dead-simple box averaging filter, but you're instructed (implicitly, I admit) to do the division and inversion inside the loop, when both of those things should be outside the loop. The fact that this simplification can be done should be part of the lesson, because writing two loops isn't much of a lesson by itself.
% a grayscale image (uint8)
A = imread('cameraman.tif');
% filter setup
w = [11 11];
% a better way
% the division is done numel(fk) times
% the inversion is done numel(A) times
fk = ones(w)/prod(w);
Af1 = imcomplement(imfilter(A,fk));
% a dumb way that's still less dumb than the assignment
% the division is done numel(A) times
% the inversion is done numel(A)*numel(fk) times
f = @(x) sum(1-x,'all')/prod(w);
Af2 = nlfilter(im2double(A),w,f);
Af2 = im2uint8(Af2);
% show that they're the same
% so why would you do it the dumb way?
% and why would you reinvent the wheel to make the dumb way even harder?
immse(Af1,Af2)
I can't run this in the forum editor, since nlfilter() uses a dialog box. On my hardware, with these inputs, the second example takes well over 300x as long to process the image. It's not a small difference.
You probably are restricted from using imfilter() or conv2(). Even if you have to write it the tedious way with loops, you can still use this basic simplification. When you write your code or report, explain why you wrote it the way you did and show that it's equivalent.
See also:
https://www.mathworks.com/matlabcentral/answers/1844003-creating-an-image-convolution-code
https://www.mathworks.com/matlabcentral/answers/791809-2d-convolution-with-same-dimensions
and related threads.
Bonus questions:
In the first example, I inverted the output instead of inverting the input. Bear in mind that nlfilter() and imfilter() zero-pad the array by default. What would happen if I'd inverted the input instead of the output? If you had wanted to invert the input, what should the padding value be? If both cases had padded the array by edge replication, would the order of operations been an issue?

⋮
Edited: DGM on 26 Nov 2022
If we pretend to answer the deleted question itself, then see this thread for multiple different methods and a note on the hazards of naive subtraction as described in the original assignment.
https://www.mathworks.com/matlabcentral/answers/247553-how-to-create-function-to-invert-image-colors
If the prior question is still valid, note that in both of the examples I gave, the output will be inverted correctly regardless of the class of the input image. In this particular case, the image is uint8, but nowhere do you see me explicitly subtracting anything from 255 on the assumption that all images are uint8.
In the first example, the class and scale of the output from imfilter() are inherited from A. Imcomplement() itself is class-agnostic and will pivot against the white value appropriate for the class of A.
In the second example, the input to nlfilter() is cast and rescaled to unit-scale double; therefore, the white value being used in the inversion is always 1, and does not depend on the original class of A.

⋮
True, you don't, but the homework assignment said explicitly to subtract the image from 255.

⋮
Edited: DGM on 27 Nov 2022
Yes, it's unremarkable that the assignment teaches a number of bad ideas. I didn't post my answer for the purpose of respecting the assignment. Anyone else is free to do OP's homework in a manner as poorly instructive as what the assignment requests.
Bear mind the ridiculousness of this entire thread. It's a garbage zero-effort homework question that John closed. I reopened it just to throw shade on the assignment itself. OP then deleted the homework question and replaced it with a filler about inverting an image, at which point I figured I'd at least preserve continuity for future readers by providing links to answer OP's fake replacement question as well. Considering they deleted their own question already, OP and the details of their needs aren't even a part of this conversation anymore.

Image Analyst on 26 Nov 2022
⋮
This looks like a homework problem. If you have any questions ask your instructor or read the link below to get started:
How do I get help on homework questions on MATLAB Answers? - MATLAB Answers - MATLAB Central
Obviously we can't give you the full solution because you're not allowed to turn in our code as your own.

Image Analyst on 26 Nov 2022
⋮
For a uint8 image to invert it
negImage = 255 - grayImage;
which is how I'd do it but it look like your homework wanted you to use for loops.