Is MATLAB compatible with Windows 10?

MathWorks Support Team on 4 Nov 2019
⋮
Edited: MathWorks Support Team on 4 Nov 2019
MATLAB R2015a and later is supported on Windows 10.
Earlier releases of MATLAB are not supported and are not guaranteed to work on Windows 10.
For more information, please see:
System Requirements:
www.mathworks.com/support/sysreq/current_release/
Platform Road Map for the MATLAB and Simulink Product Families:
www.mathworks.com/support/sysreq/roadmap.html
MathWorks does not currently distinguish between builds or branches of Windows 10 from a system requirements standpoint. MathWorks current approach is to continue to test and support what Microsoft indicates is a supported version, build, or branch of Windows. Conversely, we reserve the right to discontinue testing and support for versions, branches, or builds of Windows that Microsoft itself no longer supports.

⋮
Any updates on whether R2015a will be compatible with Windows 10?

⋮
I checked the system requirements of R2015a today at it appears Windows 10 was added.

⋮
Rui, are you using 32 bit or 64 bit?
For 64 bit see https://www.mathworks.com/content/dam/mathworks/mathworks-dot-com/support/sysreq/files/SystemRequirements-Release2015a_Windows.pdf . The only part listed as possibly requiring NET 4.0 is "Excel add-in for MPS" which might require .NET SDK 4.0. It is not completely clear, though, as the numbers given in the column are in the form "4, 0" each of which is a hyperlink, with the hyperlinks everywhere else in the table referring to footnote numbers -- but there is no footnote #0.
SDK 7.1 might be the only no charge compiler supported for R2015a, but it is is not the only compiler supported.

⋮
Rui, I faced the same problem as I have windows 10 on my lap
and this was the solution I made and it works correctly
I just ran into this same problem. No idea how safe this actually is to do, but I was able to work around it by temporarily fooling the installer into thinking I had a different version of .NET 4.0 installed. I opened Process Monitor (To install this go to this link "https://technet.microsoft.com/en-us/Library/bb896645.aspx") and used it to monitor everything that setup.exe was doing in order to find out how it was determining that I had a "pre-release" version of .NET 4.0.
It turns out that it looks at these two strings in the registry:
HKEY_LOCAL_MACHINE\SOFTWARE\Wow6432Node\Microsoft\NET Framework Setup\NDP\v4\Client\Version
HKEY_LOCAL_MACHINE\SOFTWARE\Wow6432Node\Microsoft\NET Framework Setup\NDP\v4\Full\Version
On my Windows 10 machine, these currently are both 4.6.00079. The installer doesn't seem to like this value. I temporarily replaced both of them with the string 4.0.30319 in regedit to match the value from InstallPath, and that seemed to do the trick. And of course, when I was finished, I put them back the way they originally were.
However, I did not have permission to change those values, so it was a bit tricky. I right-clicked on the Client key, chose Permissions, and clicked Advanced. Then I changed the owner to my user account instead of TrustedInstaller. This allowed me to add permissions for Full Control for myself so I could modify the Version value. I repeated the same process on the Full key. After the installer completed successfully, I put the original version values back in (4.6.00079), deleted the permissions I added for myself, and restored the owner to TrustedInstaller (to do that, type NT SERVICE\TrustedInstaller as the username).
There might be a safer/easier way of intercepting the registry reads than actually modifying the registry, but this was simple enough for me!

⋮
Hi. Today I verified that MEX compiler Matlab R2015b works on WIN 10 with Visual Studio 2015 installed. It did not work by performing default install of VS 2105 because C++ compiler support is not installed by default (file cl.exe is missing from \Program Files (x86)\Microsoft Visual Studio 14.0\VC\bin). The solution is to do custom install with C++ support included.
The answer was found here and here.
Just to mention, I upgraded to WIN10 from WIN 7.1.

⋮
I have seen on Microsoft website that a lot of MatLab versions were available on Microsoft 10 version 1703 (see https://developer.microsoft.com/fr-fr/windows/ready-for-windows#/results/?query=matlab&searchBy=1 ). Can someone has tried running MatLab v2012b on this version of Windows 10 ? Thanks

Nick on 29 Jul 2015
⋮
I have just done a clean install of Windows 10 and can confirm that it is not possible to install either MATLAB R2015a or the Microsoft Windows SDK 7.1 recommended for the MATLAB Compiler out of the box. The former fails with an error installing MVC++ 2005 Redistributable (x64), and the latter fails with a version error on .NET Framework 4.
As noted by Bjorn above, it may work for some, but be careful.

⋮
Yes! Definitely XOR. I worked through several trials to get the MVC++ 2005 libraries installed with no success. Mathworks support provided a similar list os steps, none of which worked. They concluded: "then there is a critical problem with your operating system, in which case you will need to contact Microsoft support for assistance". They're probably right, but I don't fancy a quick solution.

⋮
Björn doesn’t mention the Compiler, so while most parts of MATLAB may work under Windows 10, some may not.
Also, since you’re having problems with the MVC++ libraries, contacting MS or posting to the appropriate MS forum (if there is one) would be appropriate. If you did a clean install recently, then MS should provide you the required support. Maybe they have an alternative or a work-around.
It’s unfortunate that MathWorks hasn’t issued any updates as to what parts of MATLAB will and will not work under Windows 10 currently. That would be helpful.
I upgraded my ‘utility’ machine to Windows 10 this morning, but will wait to upgrade this one (with MATLAB).

⋮
What errors are you seeing with the VC++ 2005 redist installer?
Unfortunately, Mathworks still hasn't moved forward from a 10-year-old C runtime, which is now going to bite them (and us).
[Edit: actually, I spoke too soon. Looking at the temp install folder for 2015a, I see 4 different CRT versions all included. This is unfortunately pretty common with large software packages on Windows, where you have to wean all components from a given version to be able to get rid of it ... hmm.]

⋮
The VC++ 2005 installation error is along the lines of this error 1935 (I don't have the exact message anymore as I had to revert to Windows 8 from backup and didn't keep the screenshots). There is no doubt that the Error 1935 problem is Microsoft's, and that is where Mathworks tech support pointed the finger. Many others have had the same problem with other 3rd party software in Win 10 requiring the VC libraries and it has been raised numerous times now with Microsoft (e.g., here's one example). All that can be done is to wait.
For the record I did the clean install (full reset, wipe all files) of Win 10 twice to be sure, and the error happened every time, regardless of whether any other software had been installed or not. I tried installing the various 2005 library versions from the MATLAB temp folder manually but they gave the same error. I tried installing them from the Microsoft website, which seemed to work, but they were not recognised by the MATLAB installer which would then try to re-install them and fail.

⋮
October Update: I just tried installing MATLAB R2015b on a fully reset Windows 10 install (twice!), and it again failed with Error 1935 on the MSVC++ 2005 x64 redistributable install.
The versions of MSVC++ 2005 x64 on the Microsoft website (original and SP1) both install perfectly, but then the MATLAB install still tries to install its own version (with a different version number) and fails. I worked through this with Mathworks support, and they still point the finger at Microsoft.
It seems the only way to get a clean install of Windows 10 with MATLAB is to Reset Windows 8 first, then install MATLAB, then upgrade to Windows 10. I have done this successfully on a different computer.

⋮
Hi. Today I verified that MEX compiler Matlab R2015b works on WIN 10 with Visual Studio 2015 installed. It did not work by performing default install of VS 2105 because C++ compiler support is not installed by default (file cl.exe is missing from \Program Files (x86)\Microsoft Visual Studio 14.0\VC\bin). The solution is to do custom install with C++ support included.
The answer was found here and here.
Just to mention, I upgraded to WIN10 from WIN 7.1.

Björn Skatt on 29 Jul 2015
⋮
I installed Matlab R2015A on the new Windows 10 Pro today. Matrix multiplication and some other small programs work fine. I compiled a standalone exe using the Matlab Compiler and the builtin lcc-win32. All ok. I am testing on an old machine, running 32-bit. I am looking forward to the word from the Mathworks Support Team. At least there is good hope.

⋮
Thanks a lot for the info. Please keep us updated.

Mohsen on 14 Dec 2015
⋮
I attempted to install 2007b. No problem with installation itself but when I attempt to run the program the logo comes for a second and it disappears. Same problem showed in Win7 too but there you could switch to Classic Theme. In Win10 it does not look possible to do that as there is no Classic Theme.

Alain Mignault on 17 Dec 2015
⋮
Has anyone tried to install the most recent version of Windows 10 with an already installed version of Matlab R2015a on a Windows 7 patform?

Daniel Karlsson on 15 Feb 2016
⋮
I'm having problems running Neural Network training with parallel computing on Matlab 2015b and Windows 10. Output says "Calculation mode: Parallel with MEX Workers" when training, but it takes forever..
Task manager reports 25% cpu utilization on a single core, on win7 and 2015a I had full utilization.

Lydia Vega Ochoa on 14 Mar 2016
⋮
I tried to install Matlab in my laptop, but I can´t. I have windows 10 and when I want to install it an error of compatibility appears. If anyone knows how to solve it, please tell me. I need it to study.

⋮
Which MATLAB version are you using?

⋮
You will not be able to install R2016a or later if you are using a 32 bit version of MS Windows.
You can update Windows 10 to 64 bit, but it might not exactly be fun to do...
http://www.windowscentral.com/how-upgrade-32-bit-64-bit-version-windows-10

⋮
Do you have a 32-bit installation of Windows 10? If so, the last release of MATLAB that was supported on 32-bit Windows was release R2015b. 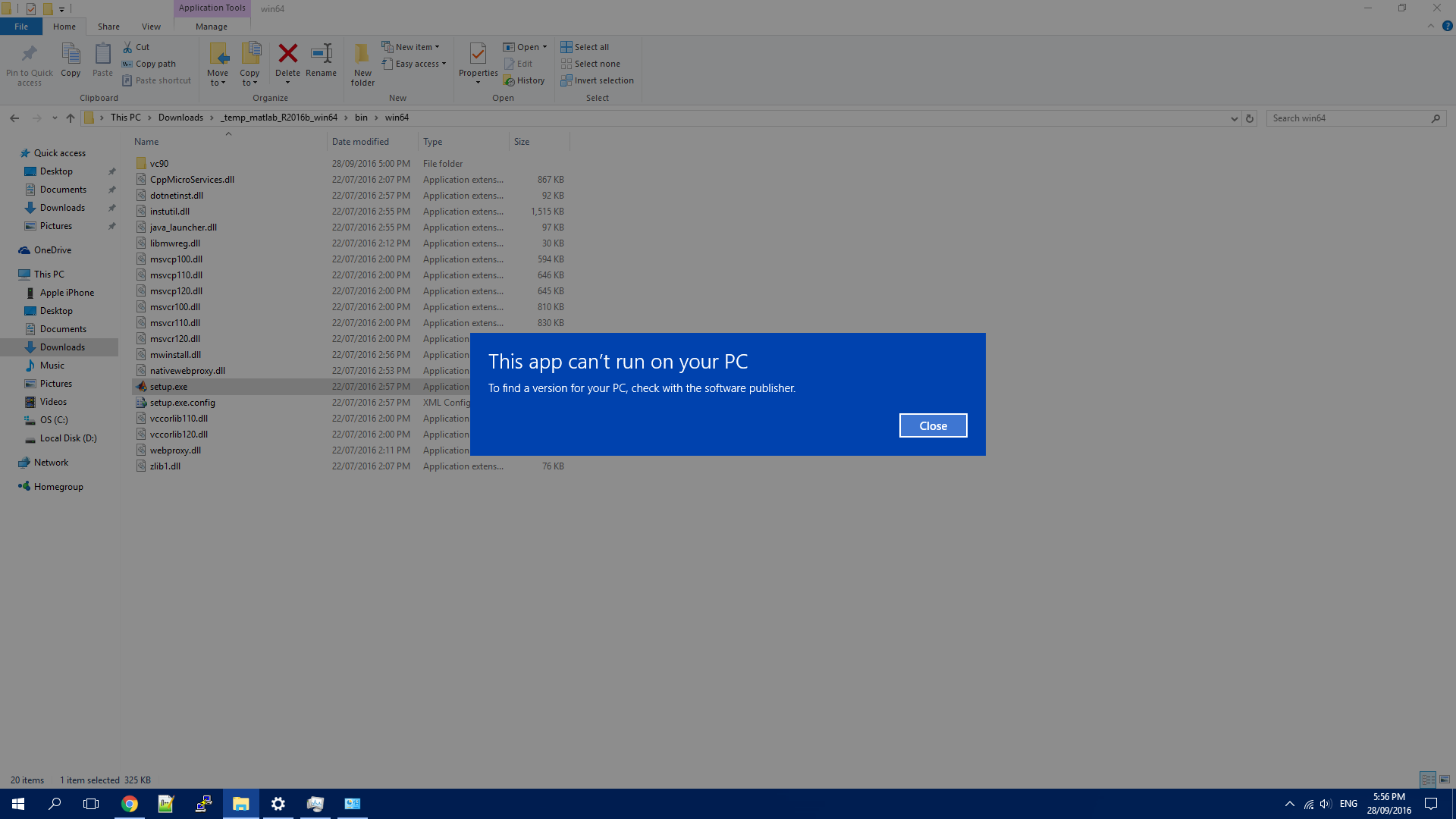 lidiya john on 3 Oct 2018
⋮
Is MATLAB 2016a is compactable with windows 10, Do the mexing functionality will work, If mex will work what we need to install for that